KING DIAMOND has been confirmed as a headliner for MetalDays, which will take place July 21st – 27th, in Tolmin, Slovenia.

On the official Facebook of MetalDays, this post was made: “With great pride and joy we would like to announce the last MetalDays 2013 headliner. There comes King Diamond! One of the greatest and most influential musicians in heavy metal, with absolute and undisputed cult status will rule the stage on our metal holiday. King Diamond, who has been sitting on his throne for over three decades, will prove to you with his bombastic performance that his kingdom is eternal. The climax of this year’s MetalDays festival is an evening of first class heavy metal that could not be more spectacular and epic. Bow to the King!” END_OF_DOCUMENT_TOKEN_TO_BE_REPLACED

Like Loading...
Burning Sea 2013, which was scheduled to be held in Zadar, Croatia from June 5th – 8th, has been canceled.

END_OF_DOCUMENT_TOKEN_TO_BE_REPLACED 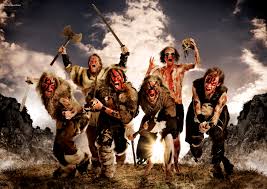 Jo Schüftan of Horns Up Rocks! conducted an interview with violinist Olli Vänskä of Finnish “battle metal” warriors TURISAS prior to the band’s February 6 concert in New York City. You can now watch

TURISAS recently announced changes in its lineup. The band’s original drummer, Tuomas “Tude” Lehtonen, stepped aside and was replaced by Jaakko Jakku. Also departing was bassist Jukka-Pekka Miettinen, who is focusing on his own musical projects. The bass duties going forward are being taken care of by Jesper Anastasiadis

WITCHCRAFT and KADAVAR are the latest acts confirmed for Metalfest Loreley 2013 which is scheduled for June 20th – 22nd, 2013 at St. Goarshausen (Rhine Gorge), State Rhineland-Palatinate, Germany.

The three-day festival pass (including camping) is only 79 €, and for 89 € you can call the fan pack including the festival pass, a festival shirt and a NoiseArt CD of your choice.