“(During the night) April 5th/6th near a German town of Munchberg, our friend, best comrade and longtime bass player unexpectedly passed away. After the show in Stuttgart last night he went to sleep and never woke up. We found him lifeless early in the morning and immediately called an ambulance. He was reanimated, but to no avail. Results of S?awek’s (“Mortifer” Archangielskij) autopsy should be known soon. In this situation, we decided to cancel the remaining shows and return home. We gave detailed testimonies to the German police. We are shocked and shattered by his sudden, unexpected death. We mourn together with Slawek’s family and friends.”

CALL OF THE VOID: Full Album Streaming At Lambgoat 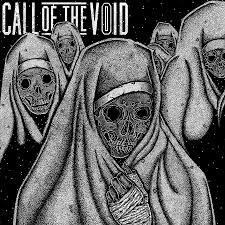 In honor of its release today, Lambgoat is currently streaming CALL OF THE VOID’s sadistic Dragged Down A Dead End Path full-length in its entirety at THIS LOCATION.

Fittingly dubbed “powerful, harsh crust grind at its fucking finest,” by American Aftermath, and “an intense and hard hitting CD, with some of the sickest guitar playing heard since Death’s Spiritual Healing,” by Wicked Channel, CALL OF THE VOID churn a bastardized mesh of filth-ridden, powerviolence-tinged hardcore with reckless abandon. With more than 25 minutes of confrontational audio hate, the ten-track Dragged Down A Dead End Path was recorded at the Boar’s Nest in Salt Lake City, Utah by Andy Patterson and mastered by Chris Mcnaughton. Notes Outburn in an 8/10 review of the record, “With a raw, messy sound drenched in over-amped guitars and driven by pure bile, they channel grindcore and Iron Monkey-esque sludgy unpleasantness and with each track – the longest topping out at 3:44 – they go off in a half dozen directions without ever losing their focus on destroying everything close by.”

CALL OF THE VOID are currently pillaging their way through the US on a three-week tour that included four scathing appearances at SXSW. Remaining dates are included below.

Order a physical copy of Dragged Down A Dead End Path HERE or a digital version via iTunes HERE. Additionally, you can watch the band’s lyric video for “Endless Ritual Abuse” courtesy of Blow The Scene at THIS LOCATION.

“From start to finish, Dragged Down A Dead End Path is a blast of hardcore mixed with metal. Not ‘metalcore’… what people think of when those genres are mentioned in the same sentence. Bottom line: CALL OF THE VOID brings ten dirty, heavy as hell, tracks of in-your-face urgency.” — Echoes And Dust

“…vocalist Steve Vanica is truly vicious. Obvious points of reference would be other crusty-core bands such as Gaza, Early Graves and to a certain extent Nails, but at the same time the band manage to invoke some of the dark punk-y groove of Trap Them, that’s too often overlooked by bands of their ilk.” — HeavyBlogIs Heavy

“A violent debut from this young band. One that will curb-stomp your ears and then ask you to say ‘thank you’ afterwards. Better wear a crash helmet, and learn to be appreciative. I, for one, am indeed.” — Sludgelord

“Having a bad day at work? Did some cellphone addicted moron cut you off? I suggest blasting CALL OF THE VOID from your speakers, as this is anger therapy in 30 minutes and it’ll make you feel a whole lot better. A damn fine album and a band you will no doubt hear plenty more from in 2013.” – The Lair Of Filth

Like Loading...
There was an outpouring of emotion today from fans and bands when the IRON MAIDEN camp sadly announced that Clive Burr – the drummer on the band’s life-changing first three albums (Iron Maiden, Killers and The Number Of The Beast) – had passed away after a long battle with Multiple Sclerosis. Clive died peacefully in his sleep last night (March 12th) at home at the age of 56.

END_OF_DOCUMENT_TOKEN_TO_BE_REPLACED

Relapse Records this week officially welcomes Richmond, Virginia’s masters of ethereal doom metal, WINDHAND, to the label’s roster, having signed the quintet for the release of their forthcoming LP.

Stated the members of WINDHAND in response to their joining forces with the Relapse horde, “We’re all so honored to be in the company of so many amazing artists. To know that our next record will be alongside some of the albums that inspired us to play music is pretty incredible.”

WINDHAND has begun laying down tracks for the to-be-named upcoming LP in their home studio, The Darkroom, where the outfit will record and mix the entire album, and deliver it to Relapse for a Fall 2013 release date. More details will be made available as the album nears release.

Having formed in 2008 in the fertile Richmond, Virginia musical underground, WINDHAND’s incredible, organic style of low-end doom and trancelike occult/ethereal vocals helped the band catch immediate attention well beyond the region, drawing comparisons to everything from Electric Wizard and Pallbearer to The Devil’s Blood and Blood Ceremony. Continuous live shows and US tours have seen them share the stage with notable acts including Pallbearer, Tragedy, Balaclava, Iron Tongue, Bastard Sapling, Pilgrim, Elder, Pentagram, Sourvein, The Gates of Slumber, Graveyard, Thrones, Mares of Thrace, Coffinworm, Across Tundras, Primitive Weapons among countless others.

In the meantime, Reflection Of The Negative, a split album with WINDHAND and local scene brethren and now labelmates COUGH, will see release via Relapse in mid-April. COUGH leads off, delivering a characteristically electrifying down-tuned epic track, while their brethren in WINDHAND serve up two brand new epic songs for their half of the dirge, in the end bearing nearly forty minutes music from two prime acts in the contemporary doom/sludge circuit. An album trailer and preorders for the split LP are available here.

Stay tuned for more recording and live updates on WINDHAND over the coming months. For Relapse Records artist coverage requests, in North/South America contact earsplitpr@aol.com, in Europe contact frank@pettingzoo.nl, or bob@relapse.com for the UK.

LAMB OF GOD frontman Randy Blythe was found not guilty of manslaughter on Tuesday (March 5) by a panel of Czech judges in the concert death of one of the Richmond, Virginia-based metal band’s fans.

Blythe was facing the possibility of conviction and a long-term jail sentence after a May 2010 incident in which a fan, Daniel Nosek, who attended a LAMB OF GOD performance in Prague, died almost a month later, allegedly from injuries sustained when he was thrown off the stage.

In a new posting on his Facebook page, Blythe (pictured below) writes: “I am leaving Prague now — I hope not to return for a long while. This has nothing to do with this city, the people who live here, or the Czech Republic itself at all. This is a wonderful place, and many people have been kind to me. Not a single soul here has been rude or mean to me at all, nor done me any harm — in fact, it is quite the opposite. I have grown to love this city, for it is a marvelous, magical town. I encourage everyone to come visit here, to see this lovely country. But for me it is a place of great sadness.

“While I am relieved that my innocence was proven and apparently I shall not be going to prison, I am in no way shape or form a happy man right now. The small inconveniences I have been through since my arrest are not noteworthy. People go through much worse daily and still keep a smile on their faces, but currently my smiles are far and few between. A young man is still dead, and his family still suffers. Please remember that fact. This family did no wrong, and have shown me great kindness — with silence, with actions, and finally with words — they spoke on my behalf to the court, and we had a private talk afterwards.

“All I will say about that is that they were very kind to me and displayed the utmost strength and class, and wished me a good life. They just want to get on with their lives the best they can. I wish them only the best, and will keep them in my thoughts and prayers. Please do the same — think good thoughts of them and healing thoughts for them. Trust me, they are good people, and I mean that from the bottom of my heart. They did NOTHING wrong.

“This picture is from Kutna Hora, at the Sedlec Ossuary. I was there yesterday — like Prague, it is an amazing place. About this city, Kafka wrote: ‘Prague doesn’t let go… This old crone has claws. One has to yield, or else.’ I have found this to be true. I am yielding, I am leaving a part of myself here, I think. Some bit of me will always roam these streets at night, and that is only fitting. Now I will go home and try to see what good I can make come out the destruction that occurred here — it is the only correct thing to do.

The state prosecutors have announced their intention to appeal the verdict; they have eight days to put this in writing.

Blythe was unaware of a warrant out for his arrest when he was detained last June after arriving at the Prague airport for a show with LAMB OF GOD. He spent five weeks in custody before being released on bail in August.

The parents of the alleged victim were demanding compensation of 10 million Czech Koruna (approximately $530,000).