I’m not quite sure how genuine a “camping” horror movie scenario will play out in downtown L.A., but regardless, this still sounds like a hell of a good time. END_OF_DOCUMENT_TOKEN_TO_BE_REPLACED

LORDI‘s new album, “To Beast Or Not To Beast”, was released on March 1 in Europe (excluding Finland) via AFM Records. The CD will be made available in North America on March 19 through The End Records.

“The road to this album has truly been paved by hardships,” LORDI leader Mr. Lordi says. “However, the new lineup of the band has given us new and fresh touch and an energetic edge to the recording process, and to the album itself.”

He added: “The album cover painting is actually a part of a larger picture. The original artwork had this vintage-styled lady holding a horned skull, which, however, was not the main point of the art piece. There was something not quite right with the setting, so I made experiments with various versions and framings. Album title was ‘Upgradead’ at that point in time, and the painting was done with that title in mind. But now, with a changed concept of the artwork, the title did not seem to fit anymore. We did not consider it an A-class name either. Our guitarist Amen came up with the final title, which we felt suitable and perfect both for the cover artwork and the album.”

“To Beast Or Not To Beast” track listing:

LORDI previously worked with Wagener on 2010’s “Babez For Breakfast”, which sold around 1,000 copies in the United States in its first week of release. The CD landed at position No. 43 on the Top New Artist Albums (Heatseekers) chart, which lists the best-selling albums by new and developing artists, defined as those who have never appeared in the Top 100 of The Billboard 200. 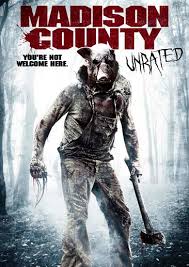 Well the first thing I have to say is kind of a personal pet peeve I have with horror movies that take place out in the countryside or wilderness.  I notice in most horror movies where our main protagonists are placed in a very rural setting they also tend to act as if the residents of such places are ignorant hicks with no education and nosey.  Madison County also suffers from this a bit when they arrive into the small community of Madison County.

Hey film makers, here is a note to take.  Just because people live in non-urban places and don’t have the latest technology doesn’t mean they are dumb or backward.  Many people from these types of communities are very hard working, smart and kind people.  I think it’s time for people who don’t live in such places to do a little research or at least know a bit about people from such backgrounds instead watching Beverley Hillbilly or Green Acres Episodes as a reference guide. END_OF_DOCUMENT_TOKEN_TO_BE_REPLACED