Warner Brothers have released a new trailer for their upcoming horror flick, ‘The Conjuring’.  Based on the paranormal investigation of Ed and Lorraine Warren, most well known for their Amityville Horror investigation and the fame from that.  James Wan director of ‘Insidious’ and ‘Sinister’ helms ‘The Conjuring’ and it looks to be a genuine creepy tale.  Also, the fact the movie got rated an R for just being too scary and not blood and guts could say a lot about the horror of the film.

You can view the new trailer below:

Over the past few weeks we’ve been inundated with a ton of marketing for the Ed Gass-Donnelly directed THE LAST EXORCISM PART II, seeing everything from trailers, photos, clips, and jazzy new posters hitting the web to get us pumped up for the Eli Roth-produced sequel. The film finally hits theaters today but before you head out to your local multiplex to check it out, CBS Films has given us one more sneak peek at the flick in the form of the opening sequence, which you can check out below. END_OF_DOCUMENT_TOKEN_TO_BE_REPLACED 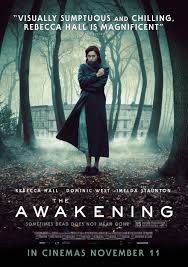 So what did I find with The Awakening?  I found what seemed like a ghost story, wrapped in a psychological analysis story of the main character ,which was also wrapped in a multi-layered story that seemed at times would sink the movie with its effort to be too intellectual.  Amazingly, the film is not sunk by all the twists and turns that it presents to the viewer and I even found that one story angle the movie presented later in the film was really interesting and didn’t see it coming in any form. END_OF_DOCUMENT_TOKEN_TO_BE_REPLACED

Movies based off “real events” or actual things sometimes can be sketchy in terms of how truthful the story you see on screen is, i.e. The Texas Chainsaw Massacre.  The Possession is a movie which is not based on an actual story as it’s more based on the legend of a dybbuk box, an old Jewish Wine box which has a demon imprisoned within.  I’m a paranormal buff so I am familiar with the item the movie is based off of and there is such an item that is floating around out there with stories attached to really make you wonder about such an item.  So how does The Possession translate this urban legend to the big screen?  Do we get some Old Testament vengeance delivered or do we get a big empty wooden box with the Yiddish word, “Schmendrick” engraved on it?  Read on! END_OF_DOCUMENT_TOKEN_TO_BE_REPLACED