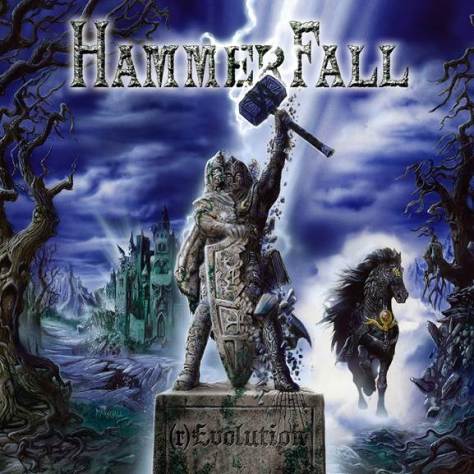 After taking a creative break last year, Swedish Heavy Metal pioneers HAMMERFALL are fully recharged and back with a vengeance. Entering a new chapter of the HAMMERFALLsuccess story, »(r)Evolution« will be out on August 29 (Sweden: 27.08., UK: 01.09., USA: 02.09.) via Nuclear Blast.

END_OF_DOCUMENT_TOKEN_TO_BE_REPLACED

Two years ago, Swedish Heavy Metal Templars of HAMMERFALL announced a creative break after celebrating their 15th anniversary of their legendary debut »Glory To The Brave«. “We are taking a pause to ensure that we have another 15 years ahead of us”, said Oscar Dronjak back then. “The plan is to use the year off to recharge our batteries and come back more vital than ever with a new album in 2014″, added singer Joacim Cans. END_OF_DOCUMENT_TOKEN_TO_BE_REPLACED

So, metal bands’ doing the orchestra thing is a thing now right?  We have Avantasia doing it, we have Manowar who has done it (of course Manowar do a lot of things) and now we have members of RAGE doing it with Lingua Mortis Orchestra.  I have always found that the metal bands using the 100 piece orchestras seem to be doing such things to try and ‘prove’ how legitimate they are to others outside of the metal community and that they are really a sophisticated band and deserve respect damn it!  In other words sometimes I feel they are trying to over compensate for something and this all seemed to have started with when Metallica did the S&M thing…and well my hatred for Metallica needs to be saved for another time.  So how does Lingua Mortis Orchestra measure up?  Do we have some legitimate music here that deserves to be heard or do we have, what I feel a lot of these orchestral affairs contain, a lot of pomp and ego stroking?   Well, maybe a little of both…let’s dissect this cadaver and see what it’s made of shall we!!! END_OF_DOCUMENT_TOKEN_TO_BE_REPLACED

“Ever wanted to be a part of an IN FLAMES music video? Now is your chance! IN FLAMES invites all fans worldwide to be a part of the upcoming video for ‘Ropes’. By simply uploading your very own video clip of ANYTHING IN FLAMES related, you have the chance to be in the actual video! END_OF_DOCUMENT_TOKEN_TO_BE_REPLACED

Like Loading...
German metallers GLORYFUL will release their debut album, “The Warrior’s Code”, on May 24 via Massacre Records. The CD was recorded with legendary Swedish sound alchemist Dan Swanö. Belgian artist Kris Verwimp, who has previously worked with such bands as ABSU, DARK FORTRESS and MELECHESH, created the cover artwork, which you can see below.

GLORYFUL was formed in summer 2010 by lead singer Johnny La Bomba and Shredmaster JB (a.k.a. Jens Basten, who is also NIGHT IN GALES‘ guitarist and songwriter). A three-track demo, “Sedna’s Revenge”, garnered great reviews in the classic heavy metal underground and the band played a number of shows with such acts as POWERWOLF, VICIOUS RUMORS, ORDAN OGAN and HELSTAR.

According to a press release, GLORYFUL‘s “music is not about any clichés or bullshit. It’s just what it is: heavy metal!”