Dutch metallers from Selfmachine are looking for a new drummer!

The band stated on their facebook page:  Ok, so here goes nothing,…

SELFMACHINE IS LOOKING FOR A NEW DRUMMER!!

We are a modern metal band from Tilburg, The Netherlands. We’ve just released our second album ‘Societal Arcade’ worldwide and are now in search of a new drummer. In the past we have played shows with bands such as Threat Signal, Uneven Structure and Kill Devil Hill (among others) and have been on a large European tour supporting The Agonist. Next July we are scheduled to play the Metaldays Festival in Tolmin, Slovenia and also have some other tours planned.

But enough about us, let’s talk about you,….

Are you a talented, skilled and motivated drummer in the age of 25 – 40? Are you ready and willing to play loads of shows and tours, record albums and music videos and not afraid to put in the hard work to get our name out there? Are you a generally pleasant human being to be around?

Then don’t hessitate to get in touch with us!!
E-mail us at: management@selfmachine.nl

Max Duhamel, drummer of the Montreal based death metal powerhouse, KATAKLYSM, is forced to take a break.
He also won’t be performing on the new KATAKLYSM  album.

When IRON MAIDEN drummer Nicko McBrain isn’t on the road, he calls Boca Raton home. About eight years ago, through friends at a golf tournament, he was introduced to HomeSafe, a Lake Worth-based nonprofit that helps victims of child abuse and domestic violence.

“I fell in love with the whole organization,” McBrain said. “I had a wonderful childhood growing up in North London, and I think every child deserves to have caring people around them to nurture their abilities and help them go out and have a fulfilled life.”

“We only hold two fundraisers a year, and this fundraiser is extremely unique,” said Matthew Ladika, HomeSafe’s CEO. “It’s a jam session and a rock party that breaks out into a fundraiser.”

Read more at this location.

Like Loading...
There was an outpouring of emotion today from fans and bands when the IRON MAIDEN camp sadly announced that Clive Burr – the drummer on the band’s life-changing first three albums (Iron Maiden, Killers and The Number Of The Beast) – had passed away after a long battle with Multiple Sclerosis. Clive died peacefully in his sleep last night (March 12th) at home at the age of 56.

END_OF_DOCUMENT_TOKEN_TO_BE_REPLACED 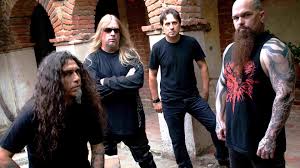 Several metal musicians have weighed in on SLAYER‘s decision to replace drummer Dave Lombardo (pictured below) for the upcoming Australian tour following a disagreement over internal financial issues. According to the drummer, 90% of SLAYER‘s tour revenue is “being deducted as expenses, including the professional fees paid to management, costing the band millions of dollars and leaving 10% or less to split amongst the four of us.”

Russ Strahan (HOUNDS OF HASSELVANDER, PENTAGRAM, LAND OF DOOM): “I have a deep respect for SLAYER and their music. This is one of the original thrash metal bands and a band that so many have been influenced by. Like most, I am shocked by the current situation but I have to say, being a musician who has been in several bands and has toured, there are things that go deeper than people outside the band realize.

“I am not by any means condoning or supporting any decisions based on selfishness and greed. I just know from experience that there is usually more than meets the eye on the inside of any major change like this.

“I hope that this is not as it seems and that the guys can work it out but like a lot of you that have commented, it doesn’t look good and I do agree that Dave is a master and just as major a part as everyone else in the band. Again, I hope that this is something that can be worked out because there are allot of disappointed fans!

“On one final note… I can’t even afford one of those $5,000.00 American BC Rich guitars and have to work a stinking 9-5 job that I hate just to get by so to put it in perspective, Kerry [King, SLAYER guitarist] you got it pretty damn good compared to most of us.”

Gus Pynn (SACRIFICE): “Just read Dave Lombardo‘s press release. Kerry King is a douche. How long before Tom [Araya, bass/vocals] leaves? Man, some guys are just dickheads. So glad almost 26 years ago when they came knocking I said ‘NO!!’ I hope Tom leaves. Kerry will just replace him with some clone and take 90% of the gate which is the way he wants it. Sleep well. Kerry.”

Bård G. Eithun (a.k.a. Faust; SCUM, ABORYM, EMPEROR): “So, Kerry King, did all the ink give you any sort of brain damage? Stop fucking around and just realize that Lombardo is just a big of a star as you are. If not bigger. Who wants to see SLAYER without good ‘ol Dave anyway? Cut the crap.”

According to Soundwave promoter AJ Maddah, SLAYER has tapped drummer Jon Dette (pictured below) to sit to sit behind the kit for the California thrash band’s appearances on this year’s festival tour, which is scheduled to kick off on Saturday, February 23 in Brisbane, Australia.

Dette joined SLAYER in 1996 when Paul Bostaph left to work on his side project, THE TRUTH ABOUT SEAFOOD. Dette performed with SLAYER at the 1996 Ozzfest to promote the band’s covers album, “Undisputed Attitude”.

Prior to joining SLAYER, Dette appeared on TESTAMENT‘s “Live At The Fillmore” album, which came out in 1995.

Dette is currently playing with ANTHRAX as a temporary replacement for the band’s longtime drummer Charlie Benante, who “is dealing with personal issues right now and can’t leave” the U.S., according to ANTHRAX guitarist Scott Ian.