I didn’t know directions from the back parking lot of Taqueria Los Comales (convenient free parking) to where I was going, but I wandered in the general direction from which I could hear the low, rumbling sound of metal pulsing ominously through the warm summer air and eventually ended up at my destination: Toyota Park where the 2nd annual Chicago Open Air Festival was taking place.

Around the festival, you could find a lot of unique experiences such as craft vendors, the Heavy Tiki Bar, the Headbangers Bier Hall, meet and greets with artists, and a wide range of unique and delicious food like grilled cheeses, pulled pork barbeque, burrito bowls, farm to table vegetarian options, donuts, pizza… this festival had by far the best food options I have ever seen at an event like this. END_OF_DOCUMENT_TOKEN_TO_BE_REPLACED

British epic metallers DRAGONFORCE have completed writing the follow-up to last year’s “The Power Within” album, which was their first with vocalist Marc Hudson. Since his live debut with the band in July 2011, Marc has gone on to front over 100 shows with DRAGONFORCE in 32 countries across the globe, including arenas with IRON MAIDEN as well as a mammoth headlining world tour to support the CD. END_OF_DOCUMENT_TOKEN_TO_BE_REPLACED

Guitarist Herman Li of British epic metallers DRAGONFORCE will appear on CBBC‘s “How To Be Epic At Everything”, a new series from the BBC aimed at demonstrating to young people how to excel in certain professions. At 10.30 a.m. on February 17 and March 17 on the CBBC channel, Li will will take his guitar through the paces, showing the next generation of guitarists how it’s done.

For more information, go to BBC.co.uk.

In an April 2012 interview with Ultimate-Guitar.com, Li was asked if there was an “aha” moment when he was first starting to play guitar that he realized he was capable of great speed. “Maybe I can explain it this way: I’m not a person who’s over-confident,” he said. “If you think you know, you really don’t know. Me personally, I think the more you learn, the more you realize the world of guitar is so big and you haven’t really learned enough. There’s not really a time that I feel I mastered anything. I think each album is just a snapshot of our lives and things change and people come out with other things and you go, ‘Oh, that’s cool,’ and take some things from that. If I think I know, then I think the music becomes boring because there’s nothing to pursue.”

DRAGONFORCE‘s new album, “The Power Within”, sold 5,800 copies in the United States in its first week of release to debut at position No. 74 on The Billboard 200 chart.

“The Power Within” was released in the U.K. on April 16 via the band’s own Electric Generation Recordings, distributed by Essential Music 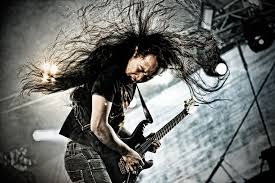