Trance-Metal skullbangers debut their video Breaking the Space.  Check it out below!

Created in 2006 through a mutual love of Scandinavian melodic death metal, Kent-based septet SILENT DESCENT added trance elements to their music to create a unique sound.

Hailed by Metal Hammer magazine as ‘the trance-metal juggernaut the world has been waiting for’ British septet Silent Descent are well-established as a rising force in the British metal scene.

‘Duplicity’, the band’s critically acclaimed 2008 release came as a breath of fresh air to listeners and has rapidly gained popularity in several countries worldwide. The music video for title track itself topped The Pit’s viewer rated charts beating a number of worldwide metal heavyweights. With the ethos of an unsigned band, the self-produced album engineered by guitarist Tom Callahan presents both the massive sound of a modern metal record and the raw, edgy excitement of a band entering unchartered territory.

Their second album ‘Mind Games’ was released in May 2012 in the UK and Japan via Rising Records and JVC Victor respectively.The innovation displayed on their album is only equaled by their inimitable live performance. With strobes, lasers and sheer energy, Silent Descent provide a show that’s not only intense and gripping, but also unforgettable. Having played at Bloodstock Festival 2008 and Download Festival 2009, 2010 and 2012 they have proved their worth in today’s metal scene and have gained countless fans along the way. 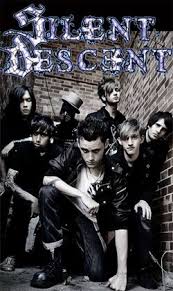