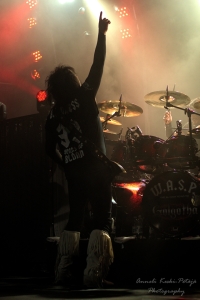 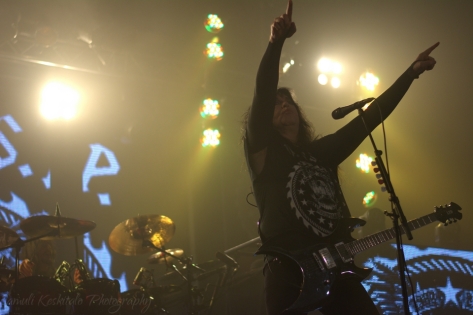 W.A.S.P., the legenday hard rock band from Los Angeles, USA. On tour with a new album called Gotgatha and in Finland with four concerts. Heavy metal week is going on in Finland and nothing could be better… or could it? Yes, it could, let me say. The fact is W.A.S.P. released a new album, which was the first one in six years and that was the longest gap between W.A.S.P.-records. And the band launched a European tour and of course there were a few shows in Finland once again: W.A.S.P. has had concerts in Finland since 1985 and I think they will continue to do shows here until the band quits for good. Last show before this tour was in the summer in Lokalahti’s Karjarock Festival. Turku (Finnish town) is a second home to Doug Blair (because of the Turku Rock Academy School), so it’s not a big surprise that they have so many concerts here. But anyway, it’s very cool, that the band feels very comfortable here in Finland and in Seinäjoki many people came to see this band once again in the middle of the week. The crowd had fun, except I didn’t: maybe two words, which describes my feelings from the gig, would be ”boring” and ”routine”. Of course there were also good things from the evening, but unfortunately that wasn’t enough. Let’s see how I felt about this show. END_OF_DOCUMENT_TOKEN_TO_BE_REPLACED

If I was a great heavy metal chef and I could take ingredients of different bands and mix them together to come up with delicious heavy metal dishes then Free Fall would be one of my main dishes.  When you take a big portion of Bon Scott AC/DC, a sprinkle of Led Zeppelin, just a pinch of Blackie Lawless from W.A.S.P. and a whole lot of salty 70’s hard rock, you get served up Free Fall. END_OF_DOCUMENT_TOKEN_TO_BE_REPLACED

Like Loading...
W.A.S.P. are the latest act confirmed for the 2013 edition of the Bang Your Head!!! festival which is scheduled to take place July 12th – 13th in Balingen, Germany.

Guitarist CHRIS HOLMES (ex-W.A.S.P.) has released a video for his track ‘Way To Be’, featured on his new solo album, Nothing To Lose, available for download via Artisthead Music. Watch the new video below: END_OF_DOCUMENT_TOKEN_TO_BE_REPLACED