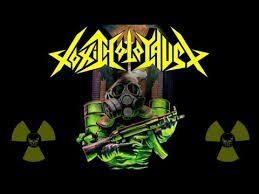 In honor of its release today, Revolver Magazine is hosting a stream of TOXIC HOLOCAUST’s From The Ashes Of Nuclear Destruction in its entirety! The monolithic 22-track anthology compiles over a decade’s worth of TOXIC HOLOCAUST rarities into one maniacal compilation of hostile bliss. Amassing the band’s many contributions to various comps and vinyl-only splits with the likes of Municipal Waste, Midnight and others, alongside demo versions of timeless TOXIC classics,From The Ashes Of Nuclear Destruction is a historic romp through the history of one of today’s most revered punk metal deviants.

Said Stereokiller of the offering, “If I was a diehard thrash fan, I’d have this album framed on my wall, another copy spinning on the record player, and a third copy in my arms, while I’m clutching it close and waiting for the inevitable apocalypse that TOXIC HOLOCAUST is preaching so fiercely.” Adds Metal Temple, “This historic look at the many facets of the band is the perfect introduction for those not initiated with TOXIC HOLOCAUST yet. There is example after example … that shows why TOXIC HOLOCAUST is the clear leader of the modern day thrash movement. They capture the essence, attitude and vibe of the legendary bands that created one of the most important genres of metal.”

Check out From The Ashes Of Nuclear Destruction at THIS LOCATION.

TOXIC HOLOCAUST is currently in the studio working on the as-yet-untitled follow-up to their 2011 Conjure And Command full-length. Praised for its “nuclear reactive riffage and Repo Man punk attitude,” by Revolver and commended for its “tar-thick riffage, staggering breakdowns, and a corroded dose of self-loathing,” by The Onion’s A.V. Club, Conjure And Command continues to reap hails from fans and critics globally. As an added bonus, the band closed the year with the honor of having the song “Bitch” rear its sonic apocalyptic menace in an episode of high-rated FX drama series Sons Of Anarchy (season 5; episode 11).

TOXIC HOLOCAUST mutated into existence in 1999, when Joel Grind merged his love for classic punk and metal into his ideal band. Like his influences – Bathory, Venom, English Dogs, Possessed, Broken Bones – TOXIC HOLOCAUST offers up blazing riffs, gravel-throated vocals, and a deadly fixation on the evil in man and a post-apocalyptic world wrapped in a DIY attitude.

From The Ashes Of Nuclear Destruction is available now. Order your copy HERE. And don’t forget to check out the band’s new lyric video for “Agony of the Damned” HERE!

Cara McCutchen lead singer of Edmonton, Canada’s Mortillery was kind enough to sit and answer some questions about her band Mortillery, their future plans and herself.  Read below for the interview!