Nummirock is one the longest running festivals here in Finland and from what one of the festival goers told me, it has been going since the 1920’s.  Of course, it was not always metal festival, it originally was a jazz and traditional music festival and in the late 70’s and 80’s it transitioned into the hard rock metal festival it is today.

So, this would be the first year I was going to get to personally attend the festival and at mid-summer.  So, I was hoping for nice weather and great music…well…the music part came through.

Only in Finland will mid-summer be in the teens, windy and rainy…woo-hoo break out the Bermuda shorts and take off the t-shirts baby!!!!!  Well despite all this the line up here for Nummirock was strong and getting to see Sodom and Saxon live for the first time was also a special treat for me.  Also, I got a few pleasant surprises from some bands which I will detail in my summary of each band below.  So, as I get over my pneumonia please enjoy the review! 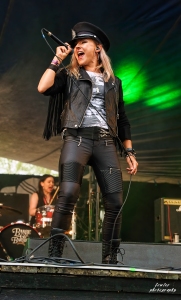 by how they perform in not ideal situations.  While I mentioned how bad the weather was at Nummirock and this can undoubtedly affect how a band performs but how a band behaves on stage when there isn’t a large audience is also very important.  It is easy for band to go out and be pumped up for a huge crowd and a lot of media attention, but you can really tell how sincere a band is when they go out and play to a crowd of about five people in utterly shit weather.  Here is where I was really impressed with Barbe-Q-Barbies…they came out and rocked through their set list as if they were playing to large crowd and lead singer Niki came out and really put her all into her singing and stage performances…as did all the band members.  I really must hand it to the band they really showed they have what it takes to be a real rock band.  To play 100% no matter the conditions.  Also, I was also really impressed with the band’s music.  I admit I was not familiar with the band’s music before Nummirock, but I think if I had to make a comparison I would compare the band to a more refined version of The Runaways and a harder rocking version of the Go-Go’s.  They have fun catchy songs, but they are not pop.  Big recommendation from me for this band.  Keep up the good work ladies.

I haven’t lived on the edge of a broken heart since the 80’s and well I guess it was time to walk the edge again as Vixen decided to come and enjoy the lovely weather.  I will admit…I was never a big fan of Vixen.  I remember they had a couple hits in the late 80’s then they disappeared.  Also, as a bit of trivia Richard Marx produced their debut album.  If that matters to anyone who is reading this.  I can’t say after all these years I am now a fan of Vixen either.  It is not that they don’t play or sound good live…I just never liked their songs.  I will say though…lead singer Janet Gardner’s voice is still amazing after all these years.  Good for her for still being able to rock out those notes.

This was a band I had no idea about.  But long story short is that these guys are young thrash band coming out of Finland. I was really impressed by the vocalist has a good strong voice for the music and reminds of a several old school thrash bands.  The band themselves have catchy songs with killer riffs.  They have two lead guitarists who know how to play off each other and put out nice crunchy riffs.  Definitely a band to keep an eye on and a nice surprise from the festival.

??????  I have no idea about this band…I took some photos…they like to sing about drinking or something?   Ummmm…. enjoy the photos? 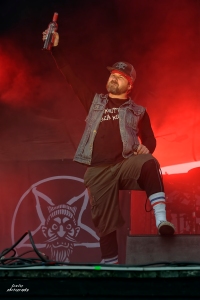 Ahhh…the main reason I decided to come to Nummirock.  Beast in Black lead by Anton Kabanen.  I was at Beast in Black’s very first show when they opened for Nightwish several years ago in Helsinki.  This was with fresh new singer Yannis Papadopoulos from Greece and basically an entire new band.  So, I was interested in seeing how the band has grown from that first show until now, where the band now has had time to gel as a unit and Yannis has time to grow in experience.  And what a difference these past couple years have made!!!

The band first seemed to look more at ease on stage and were really enjoying themselves.  The main difference I saw however was the confidence Yannis showed compared to his first gig with the band.  While his voice has always been great his stage presence has really grown to whole new levels!  I think he has studied Rob Halford in particular with waving around his fists and just how he moves on stage.  The difference is light and day and just how much Yannis has grown as a front man.

Also, even with the horrendous weather, the band sounded amazing live.  I will

even say they sound better live than on the album which is always a plus for a metal band.  I have always thought metal lives and dies by how it sounds live and metal bands cannot survive purely based on studio albums as fans will desert a band if they suck live.  Here Beast in Black have really shined, and they NAILED it live at Nummirock…. though talking to Anton ‘The Perfectionist’ Kabanen…he was worried the band sounded bad and that things did not go completely right.  I guess they missed a note somewhere in the set.

If you get a chance to check out Beast in Black live do not pass up the opportunity.  You will not be disappointed!

Sodom was another reason I wanted to come to see Nummirock. Out of the three German thrash bands, Sodom, Kreator and Destruction, Sodom has been the one I have been drawn to the most.  Now, I want to admit I am just a casual fan and not an expert on their music, but they have had songs over the years that I have enjoyed, and I like their subject matter.  So never getting to have seen the band live I was really interested to see how the band performed.  Again, this a band I think is much better live than on their albums.  Tom Angelripper is a great front-man and he really adds menace to his songs.  Also, I had always been familiar with Sodom being a three piece but apparently Tom decided to bring back an old guitarist that was in the band 30 years ago and added a second guitar player.  I have to say this seemed o be a good move as it really added some depth to the band’s sound.  I was really impressed with the song ‘The Saw, is the Law’.  I thought this song sounded great live and much more menacing than the studio version.

I was so impressed with Sodom, I wanted to buy some merch…sadly…the band didn’t bring any???  What is going on with that guys?! 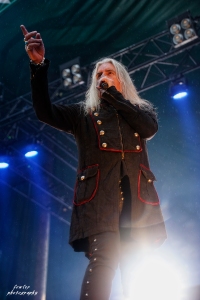 AHHH!!!  The mighty Saxon!  Another great band I have never got so see live sadly to say.  To say these guys have been influential to metal is an understatement.  One of the more well know NWOBHM bands coming out of the early 80’s Saxon has been churning out classic metal tunes for well over 30 years.  Always being helmed by the ever-amiable Biff Byford, the band came to Nummirock promoting their new album Thunderbolt and opened the set with the title track.  And like in true Saxon fashion, ‘Thunderbolt’ is a true classic metal tune.  The band went on through their set playing both new and old tunes and it was great to hear songs like, ‘Crusader’, ‘Princess of the Night’ and ‘Denim and Leather’.  All the while Biff joking with the crowd and showing what being a veteran front man is all about. Also, Biff’s voice is amazing for a man his age…in fact it really doesn’t sound like it has really changed at all.  Maybe it is all that British tea keeping it in top shape.

I am happy to now be able to mark off my bucket list of seeing Saxon live now.  Great experience.

Ok by this time, I was wet, cold and miserable.  But ABBATH was basically the

headliner for this day on the main stage and I took my cold ass out there to take some photos.  Now I am NOT a black metal fan at all.  BUT I will admit…those bands make for some good photos if you can get some good shots in between their horrible lighting.  ABBATH was not different…cool looking stage outfits…horrible lights for photos hahaha…but I did manage to get some shots in.  I have to say though…I am not impressed by ABBATH…but again this is not my type of music.  I know the guy has his fans and that is good.  And I have seen interviews with him and he appears to be a cool and funny guy.  Unlike most other people in black metal bands.  So that is cool to see.

So, this basically wrapped up my time at Nummirock. Sadly, I was only able to participate in Friday as I had to work Wednesday and Thursday and after being exposed as I was to the bad weather on Friday I thought it best I went back home to try and avoid getting sick.  Which I came very close to becoming.

However, after just experiencing one day of Nummirock, I was really impressed with this festival.  I really liked its location, in a forested area by a lake with a campground, which made everything feel intimate and like a community.  I also liked the lineup the festival had.  While there were not any big huge AAA bands there were a lot of just quality bands overall which was nice.  I also got to find out some nice surprises such as Maniac Abductor and Barbe-Q-Barbies.

If I had to say any negatives it would be that I wished there was some meet and greets after the shows.  I would have loved to meet a couple of these bands and ask them some questions and compliment them on their performance.  This may have been due to the weather and the bands were not able to do meet and greets but I am not sure.

Overall, despite the weather, Nummirock is a GREAT festival where the location is great, the lineups are solid, and everything feels like a close-knit metal family.  If the festival organizers would have me again, I would love to come back again.  Just this time I will come better prepared, so I can enjoy the whole experience!  Thanks, Nummirock!!!