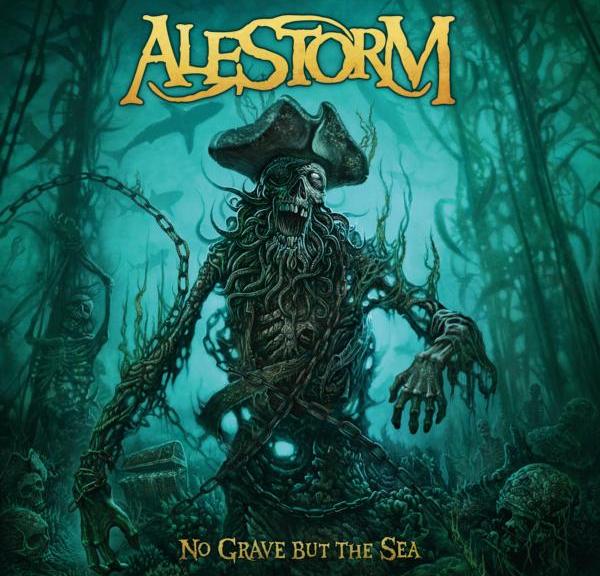 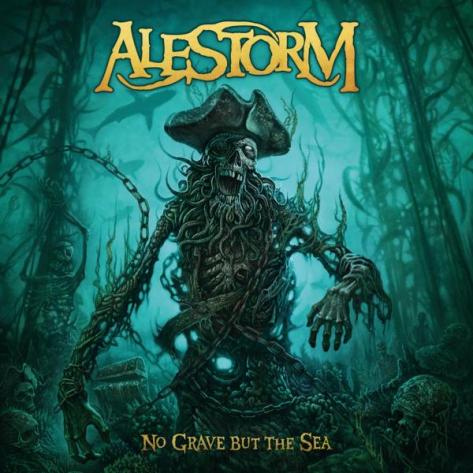 Alestorm No Grave But the Sea

The first five times I listened to this album, I was sitting at my desk at work with a bud in my right ear but not my left because having both in is a safety hazard. I work as a graphic artist for a corporate printing company. On my monitor was the worst artwork ever, a pixilated low-resolution full color image of a cross superimposed over the world, the whole thing encircled by the words “The One True Life Church of Christ Our Savor.” I had already heard “No Grave But the Sea” and “Mexico,” and at that moment I had just decided to skip to what promised (by merit of its title) to be the most interesting track, “Fucked with an Anchor” (a title which evoked memories of that classic love song “Fucked with a Knife”), and my grim workday was made instantly sunnier by Christopher Bowles promising to track down and anchor-fuck the witch doctor who cursed him forever to spew four-letter words like a foulmouthed pirate.

But it takes more than hilarious lyrics about punching witch doctors in the balls to brighten my workday for long. The rest of the album, while lyrically entertaining, rehashes the verse-chorus-verse-chorus power metal feel from all four previous Alestorm albums to such an extent that I kept wondering if I was hearing the same song over and over. And I get that a band like Alestorm has to rely on thematic consistency while walking a fine plank between creative repetition and tired stagnation. It must be hard to carry on as a pirate yar after yar. Don’t get me wrong, there’s absolutely nothing wrong with that. Alestorm have never taken themselves that seriously, which has only worked to their benefit. (Who else would ever tour with a giant inflatable duck?) What I hear on No Grave But the Sea can only be classic Alestorm: heavy metal full of catchy hooks and silly lyrics that tell stories about a Paraguayan murderer who has hooks for fingers (and I still don’t understand that because Paraguay is a landlocked country, but that’s just me thinking too much about lyrics that no one needs to think deeply about). Alestorm through and through, unmistakable. Few bands ever attain five albums’ worth of success, much less a signature sound that tells you you know you’re hearing Alestorm.

No Grave But the Sea stays in your head after you hear it. It makes you want to hear it again. It makes you laugh. But at the same time, it’s lacking something. It doesn’t take itself seriously, as no Alestorm album does; but considered seriously, it doesn’t hold up. It seems almost . . . tired.