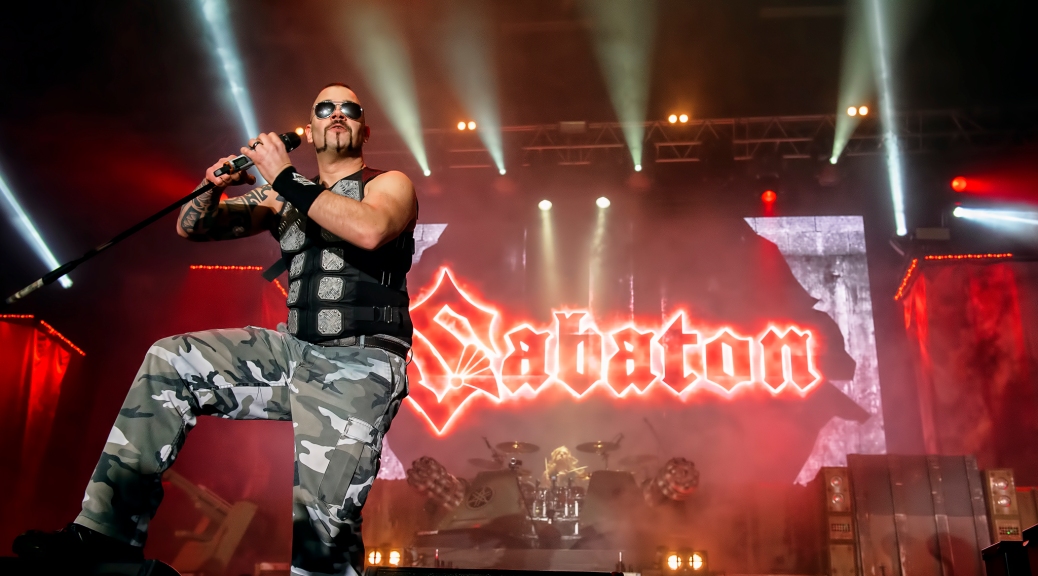 Report and Photos by: TJ Fowler

When the old meets new and ushers in a new era.  This is what the Sabaton/ACCEPT show at its core is.  ACCEPT is a well-established band in the metal genre with a  dedicated fan base that are always eager to see them and Sabaton is a band on the rise, looking to make the next big step in their career.  In this case, that step is becoming a headliner in European arenas.  That is right, not headliners for a day of a festival but arenas, for their own tours.  With ACCEPT coming along as Special Guests was a genius move for both bands.  For ACCEPT, it opens them up to younger fans who came for Sabaton and for Sabaton it brings in an established fan base from ACCEPT to add to their already large and growing fan base as well and help fill the arena.

The question is…did it pay off for both bands.  Hell yes it did.

ACCEPT took the stage about 8 pm and started off with the crushing song ‘Stampede’ and kept up the pace throughout their whole set.  Restless and Wild, Fast as a Shark, Princess of the Dawn, Teutonic Terror all crushing and great songs for an arena crowd.  For a ‘Special Guest’ slot the floor of the arena was quite full for ACCEPT to perform too.

As with any band who are veterans in the metal genre the band sounded great and were energetic in their performance.  I have seen ACCEPT about 3 times since living in Finland and every time they have put on  a professional and great show and one worthy of the price of admission.

I walked the floor of the arena as I was taking photos and getting a feel for the crowd and everyone seemed to really be into the show even though they weren’t throwing hands in the air much…also it was a Saturday night, in Finland and people on weekends here tend to be a bit sloshed during these times but everyone I could tell was having a good time. But maybe they didn’t feel like throwing their hands in the air…just throwing up.

Also, I spoke with on younger girl named Milla I believe, who said she came specifically to see ACCEPT from Kuopio (About 4.5 hours away) which is always encouraging to hear and see.

way they can.  Fast, furious, focused and RAZOE sharp.  Any fan of the band or metal in general should be pleased with the show and hopefully some of the Sabaton fans who haven’t heard ACCEPT will now become fans also.

Next up was Sabaton.  I have seen this band many times since moving to Finland about 5 years ago and this band, along with ACCEPT always put on a great show.  This time…I truly was in for something new.

As I mentioned earlier Sabaton are looking to make the next big step in their career by doing Arena shows.  By bringing on ACCEPT as an established metal act helps them accomplish this.  While ACCEPT had a large crowd on the floor Sabaton filled up the rest of the arena and boy did Sabaton pull out all the stops for their debut arena tour.  Pyros, big screen theater screen, actors portraying soldiers from World War 2 and Sparta, a Tank Drum kit and a stage theme.  Sabaton brought the big guns so to speak.

Opening up with Ghost Division, Sabaton hit the stage and cranks out war history song after war history song.  Their new album, ‘The Last Stand’ is what the tour is based around so of course I got to hear a lot of songs from this album, Lost Battalion, The Last Stand, Winged Hussars and more.  All going over well with the crowd.  Of course, being in Finland, Sabaton had to play songs about Finnish Military.  So we got White Death and Soldier of Three Armies which of course the crowd enjoyed immensely.

Sabaton have never made any secret about being fans of Iron Maiden and have opened for Maiden on several occasions as well.  So, I noticed on this tour that Sabaton brings in some subtle homage to Maiden.  On one song they have old news footage of war scenes and speeches of world leaders of the time.  As I was watching this I was thinking, ‘This is like the Churchill Speech from Aces High’…when…the Churchill speech starts up.  I couldn’t help but chuckle but it was a nice touch.  Now all Sabaton needs is a Swedish Eddie to come up out of their drum kit.

Sabaton has also always been about the FANS and their front man, Joakim Broden is a

walking promo machine on stage.  I think the guy is one of the most charismatic and down to earth guys I have ever seen on stage and off.  He is funny, engaging and comes off as a sincere guy which in this business is worth a man’s weight in gold.

This is a new era for Sabaton and it is nice to see the band’s hard work paying off for them.  They put on a great show, the arena was full and everyone had a fun time.  I wish the best for these guys as they seem like genuine guys and have paid their dues so I think they deserve this next positive step in their career.  Good job guys.  You deserve it.