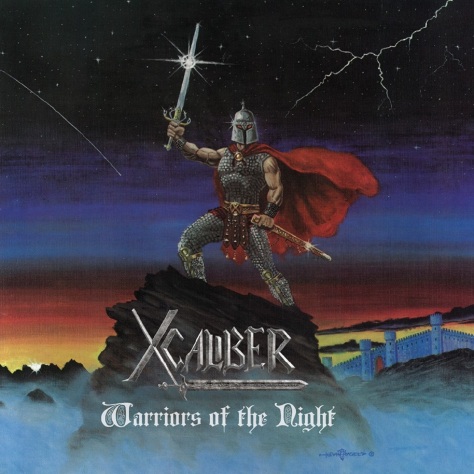 My, my how the modern age of technology can bring the old and obscure back into the light again.  There are a number of labels out there who do their best to make sure that the bands who didn’t get their break back in their prime at least get to see a wider audience today.

So we have Heaven and Hell Records digging in the crypts of heavy metal to uncover the tombs of various metal artists they deem worthy for new life.  One such band is…X-Caliber and their album ‘Warriors of the Night’.  So does the Dr. Frankenstein routine worth the effort for X-Caliber?  Read on!

If a passerby in a record store years ago would happen to see ‘Warriors of the Night’ on the shelf you couldn’t blame them for thinking the band was some kind of Iron Maiden/Fantasy Metal band.  The cover artwork looks like a sketch fa Dungeons and Dragons player would draw for their character and the band’s name also feeds that perception.  However, what you get with ‘Warriors of the Night’ is less fantasy and more classic rock.

Yes, there are two or three tracks that focus heavily on the fantasy theme, tracks like ‘Warriors of the Night’ and the FANTASTIC track ‘The Sword’ being the two big examples.  However, what the bulk of the album consists of are very well composed, catchy, mid tempo to slow rock songs about relationships and so on.   Not at all what I was expecting.

The thing that caught me off guard the most about X-Caliber after the initial surprise of the song themes was that the band reminds me heavily of Vandenberg.  The track ‘Tell me Why’ mimics the same style as Vandenberg as do many other of the tracks in terms of tempo, theme and style.  I actually found this quite pleasant to the ear as the songs are fun to listen to and well written overall.

I wouldn’t call X-Caliber a metal band but more like a classic rock band from the 80’s who played 70’s classic rock as it was transitioning into the 80’s style.  With that being said the band blends both decades together to create some really nice songs whether they are fantasy themed or more contemporary.

Since this is a re-master I have to comment on the new production the album has received.  Overall, the sound on the album is nice and crisp and Heaven and Hell did a good job in giving this lost gem new life.  However, I did detect that the bass drums seemed a little heavy and at times seemed to clip a little bit.  I am not a sound engineer so I might be wrong on this but there were spots in some of the songs that the sound of the drums seemed pretty thick and cut out a bit.

So why did X-Caliber come and go back in the 80’s? Who knows?  Maybe because of the perception people thought they were?  Luck?  A mishmash of different song themes that couldn’t fully capture a certain demographic at the time?  Your guess is as good as mine but luckily we have labels out there like Heaven and Hell Records who take the time to give a  newer generation of metal and rock fans and opportunity to listen to lost gems like ‘Warriors of the Night’.

There was only a limited number of these printed and many have sold already but if you can get your hands on a copy follow the links in the header and try to snag you copy ASAP!