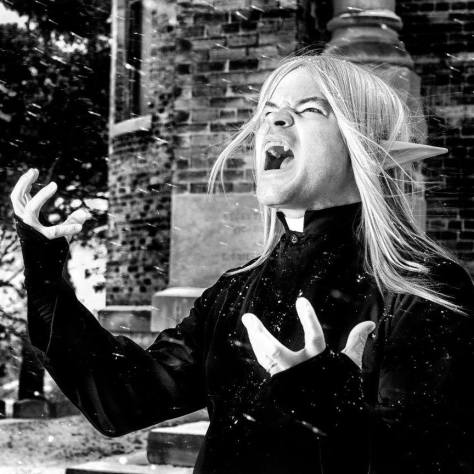 I don’t hear of many metal acts coming out of Milwaukee, Wisconsin to be honest…much less a solo doom act that has a guy dressed up like an elf going to a LARP battle or Lord of the Rings Convention.  But…here we have Unearthed Elf and his album ‘Into the Catacomb Abyss’.  I will admit I didn’t know exactly what to expect from this band with him claiming to be a form of doom I was expecting some slow droning guitars and maybe some mumbling vocals.  What I got…was a bit….different.

Upon turning on Into the Catacomb Abyss I was hit with some super catchy riffs and the title track song that drew me in immediately.  I was SUPER impressed with the guitar work on this album.  Very well crafted guitar hooks and the sound was very crunchy and they actually don’t really sound like doom but more old school metal or thrash.  So I was immediately swept into the album and interested to hear more.

As the album rolls on through its ten tracks the amazing guitar work is present the entire time and on top of that, lyrically the songs tell some interesting stories and so the songwriting matches the music and each flow together naturally and organically with nothing seeming forced or ‘trying to make something work’.

The one thing that I think really took me off guard is the vocals.  Keith D. who is also every other part of the band sounds like an 80’s new wave singer in a metal band putting out some killer tunes.  This is the only part of the album that I was a bit turned off by or at best a little mixed. The music is delivering some punch while the vocals are delivering Depeche Mode.  I am not a D. Mode fan.  At times when I was listening to the songs I couldn’t help but think if the vocals had a guy in there that had some gruff and gravel in his voice these songs would be taken to the next level big time.

Now, don’t get me wrong, the vocals do NOT make any of the songs unlistenable or bad.  In fact the whole album is a MUST HAVE.  It is just the soft and 80’s new wave vocals are a bit too smooth for the style of music here, in my opinion.  However there is a surprise with the vocals on the last song where Keith D. spreads his wings a bit more and goes from New Wave to more of a gothic, 69 Eyes style of singing and this actually suited the song WAY better.

But let’s not stick on the vocals so much, I don’t want that to be the main focal point.  My main focal point is that Unearthed Elf has put out a fantastic album from a place I only knew for Laverne and Shirley, Happy Days and the Milwaukee Brewers.  For a solo production the album sounds awesome and if I hadn’t known better, I would have believed it was a band composed of 5 different people because the production sounds that organic.

Do yourself a favor and follow the band on Facebook and the links above to find out how to get the awesome metal album due out on Halloween!