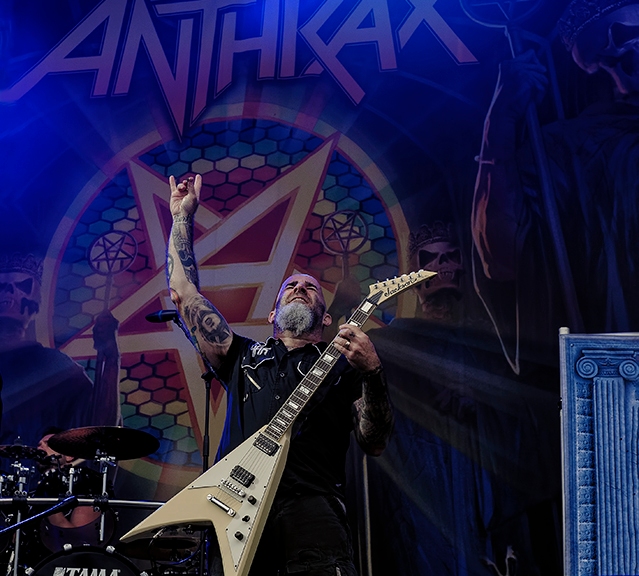 So for day two, I had the opportunity to take a tour of the Tuska Festival with Jouni Markkanen the festival promoter and Eeka Mäkynen the CEO of Finnish Metal Events and learn a bit of the history of the festival and how the organizers try to improve each year by adding small improvements over time.  I found this tour very informative and I really enjoyed the information the tour provided.  I like that the organizers recognize certain challenges they are faced with when putting together the Tuska festival.  Such as having to deal with the long days in Finland and thus the sun shining all day and night and killing off the stage lights.  As a result, this year we had a huge tent stage for the second stage which really helped the bands on that stage to have great stage lights.  I also got to meet Finland’s most famous sauna guy.  He tours the world with his mobile tent sauna and I got to speak with him briefly about his sauna and how it got started. A very interesting guy and story.

Tuska also has implemented some behind the scenes areas like whiskey bars and even a fine dining area for those who want to eat a real meal instead of the more fast food offerings out in the festival area.  This area was really cool as they had candelabras with roses in them on the tables and the area was very well done and anyone can come in and eat…no tie required! So fine dining meets heavy metal!

The organizers have also begun setting up pressers for interviews with various band members and also famous Finnish personalities.  They also had an artist known for taking x-ray prints of injuries and making displayable art to help decorate various parts of the festival with the x-rays use as lamp shades for the lighting which was cool to see.  My one suggestion on that would be for the giant hanging lights in the stage areas, instead of making them of all small x-rays have them display one giant x-ray of a skull with a knife in it or something.  That way a viewer can actually see what the x-ray is instead of all the small ones where we can’t really see the details.  Otherwise, the theme goes well with a festival named for PAIN!

It is also interesting to note that the organizers are working on converting more of the area into workable stage areas, such as the giant metal tank silo that was used to store gasoline in the past.  It will take a few years but I think the effort will be worth it.

This was the 19th year Tuska has been in existence and next year will be its 20th anniversary and I can’t wait to see what the organizers have planned for it.

So after the tour it was back to the bands!  The first band on the day for me was Ireland’s Primordial.  Again, this is a band I had no idea about but found myself in the photo pit taking photos.  As I watched the band I have to say I was pleasantly surprised by the songs I heard.  I was expecting something more death metal-ish but was treated to something…well; I am not sure…maybe a bit more doomy/cultish in terms of the speed.  But there is something strangely hypnotic about Primordial and I am glad I was able to see them live.  From a visual perspective the singer dresses like a guy from a black metal band while the rest of the band looks like just normal dudes…interesting contrast.  Overall, I was impressed by Primordial and glad I got check them out and I hope to get to see them again in the future.

Next up was Turmion Kätilöt, Finland’s favorite Techno-Metal-Humor band.  These guys have been around for years and ALWAYS put on a fun show and today at Tuska was no different.  The fans were packed in front of the main stage throwing around beach balls and going crazy.  The band opened with one of their more notable songs, ‘Grand Ball’ which is always a hit with the Finnish fans.  As always the lead singers, Spellgoth and MC Raaka Pee were putting on a show in full force and invading each other’s personal space.  I notice this band tends to really invade people’s personal spaces a lot…in fact…I think it is one of their main purposes in life! HAHA!  Anyway, the band put on a fun and great show for the crowd which is what you want in a festival atmosphere like this. If you like techno/industrial type metal with a lot of bizarre imagery…you really can’t go wrong with these guys.

Next we have the big bad Anthrax coming up to perform.  I have never been a huge fan of Anthrax but I understand their place in metal history and as a live act they always put on a very good live show.  Today, the band was on fire.  Their sound was top notch and the band’s energy on stage was 110% full throttle.  Scott Ian of course did his running around thrash dance and bass player Frank Bello is a force of nature that seems unstoppable.  Joey Belladonna of course is a great singer and knows how to work the crowd as only someone who has been doing it for years can.  Again, I want to state how impressed I was with the sound of the band.  Everything was crystal clear and it left me very impressed with the band’s live show.  So while I have never been a huge fan of the band’s music I do respect them as musicians and as a live performance they have earned my respect.

Now here comes a band I was really interested in seeing.  Havok, coming all the way over from Denver, Colorado to deliver some American thrash metal.  I had heard of the band but didn’t really know a lot about them.  When I saw they were on the billing for Tuska I was very excited to see them.  The band got delayed in their flights so they weren’t able to perform until later in the evening and they had to switch slots with Lord Vicar.  This worked out for me as I had to eat during the time they were supposed to play.  So anyway, the band comes on and starts shredding the place up and hitting the audience with such force and energy that apparently the lead singer/guitar player had to destroy his own guitar.  Basically, what I am saying is there were some technical issues to the point the lead singer in the middle of song got so pissed off he slammed his guitar down and broke off the headstock.  Despite this, he just grabbed the mic and just kept singing and the band kept playing even more ferociously than before.

After the song, the singer got another guitar and told the crowd they are going to perform

a new song they are writing right now called, ‘Dave Broke his Axe’.  Which they played for about a minute to test out the new guitar.

Despite these issues Havok tore the place fucking up.  I really was impressed by the band’s songs, their energy and their ability to deliver such a kick ass show despite having some technical issues.  In fact, I think the technical issues made the show even more spectacular.  I even talked to some people on the train after the festival ended and they really were impressed by the band.  Count me in as a new fan of these guys and I can’t wait to hear more.

Now we come to the headliner of the evening, Swedish cult doomers, Ghost.  This is one band that when they first hit the scene I must have picked a bad song to listen to first or something as I was not very impressed with what I heard.  However after seeing them headline Tuska I will admit I may have been wrong about the band.  Visually the band looks fantastic.  The lead singer definitely has the evil pope look down and the rest of the band, known as the Nameless Ghouls, have some strange cult in business suits look going on.  But getting to the songs, the songs themselves are very ethereal and mystical with the haunting voice of Papa Emeritus III adding a new layer of spookiness to the tunes.

The stage setup was fantastic and it had been raining during

the day so it added an extra level of haunting atmosphere to the show.  The crowd was again packed out in front of the main stage and there were people there of all ages to see the band which was really cool.  There was even a little boy on the shoulders of their parent going wild to see the band.  The fans were dressed up for the part as well as people during the day of the festival were seen dressed in corpse paint and religious outfits.  Very cool.

So again this is a band I may have misjudged on my first listen and am glad I got to be re-exposed to them as I am a new convert to the cult of Ghost.

So this ends day two!  Next up…DAY THREE! 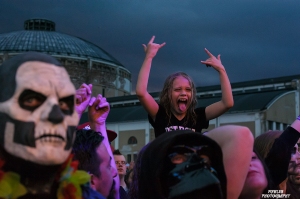