Phots and Report by Samuli Keskitalo

”Amazing”, ”cool”, ”epic”, ”sensational” etc. I would prefer all those words, when I describe my feelings after the gig, when Apocalyptica played in Areena Oulu 20.11 during their Finnish part of the Shadowmaker World Tour. Apocalyptica released their eighth full-length album just before the summer and since then they have been playing  many gigs all around the world. This week was the Finnish part of the tour of 5 shows.  When you check out the other concert reports from Apocalyptica’s Shadowmaker tour it’s very easy to see, that all those reports have something in common: a very positive feedback. And mostly the Shadowmaker album has received many positive feedbacks as well, so the set for the evening was very close to perfect.

Apocalyptica hired a singer named Franky Perez for the new album – so the difference on the vocals was very different between that one and the previous albums, because now there was only one singer to sing all the songs. A reason why Franky was hired was the band wanted the keep main focus on the vocals and the singer should be as well able to tour with Apocalyptica – and so Franky has brought in. For me that was a very fine decision, because on the previous tours there has been one, or several guest vocalists, or the shows have been instrumental. I liked very much the new album  and I was very excited to see Apocalyptica doing their own show on this Shadowmaker tour.

The Blanko was the support act a rock group from Helsinki, Finland. Before this day the band was almost totally unknown band to me but I watched their show this night. And yes, it was worth of it: Many very catchy rock songs was a very good choice to put the start to that night and the audience agreed with that as well. I took few minutes to check out the background information from that band and it seems like they have released two albums. I shoulddefinitely take a  closer look these, because their attitude and style on stage was very nice to see and they impressed me: The main singer and guitarist Pauli Hauta-Aho took the stage like a crazy rock man, bass player Jyri Tikka played his parts strongly and drummer Jarkko Saarinen totally eraned my respect, and the audience’s too.

After about a 20 minute pause Apocalyptica started. I could easily say, that they have made the right choice about the start of the setlist: Reign Of Fear, Grace and then I’m Not Jesus and that was the part where Franky Perez came in. Reign Of Fear is a instrumental song with length of about six minutes and those six minutes contains nice and catchy drum fills by Mikko Sirén, very fast comping too, and plenty of time for all those three cellists to show what they do best with their instruments. A very good way to start a Apo-show. The second song Grace is also an instrumental from the Worlds Collide album. Paavo Lötjönen is one of those three cellists and I’m pretty sure Grace is one of his favourite songs to play. Paavo is definitely a show man and during Grace it was funny and entertaining at the same time, when Paavo played his riffs, shaked his pelvis and flirted nicely with the audience. 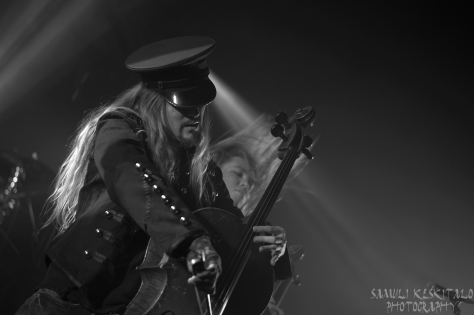 ”Do you want to singalong!?” asked cellist Eicca Toppinen and then came singer Franky in and they started with I’m Not Jesus. Originally Corey Taylor from SlipKnot and Stone Sour made the vocal sections to that song, but in my opinion Franky managed too to sing that one well– and all those other songs with vocals as well, not just songs from Shadowmaker. And one of my highlights from that night came after that: Not Strong Enough. The crowd singed beautifully together and it was very easy to see from band members faces, that they loved to play there that night.

I know many people, who denieds Apocalyptica just because they think still Apocalyptica are four cellists playing Metallica. And without drums. The fact is Apocalyptica has been much, much more, than that since their fifth full-lenght album from 2005. But they made their impression and breakthrough by Metallica covers and that side of Apocalyptica is with them of course in the live setlists as well. And many other metal covers too, like Sepultura’s Inquisition Symphony, which was also played that night, right after Master Of Puppets cover from Metallica. I haven’t ever been a huge fan of that side of Apocalyptica, but I understand they play those covers live – and yes, the audience was singing with Master Of Puppets of course.

The evening continued with the songs Bittersweet, Harmageddon and

Hope. Apocalyptica has always made some kind of remakes of old instrumental songs on tour and played them on stage with a new arrangement, like how they play Hope now. There was still Riot Lights from the Shadowmaker album to play before Franky came again to the stage.

Franky was again there and it was time for the title track of the new album. My personal favourite song from the new one was maybe the biggest highlight for me, even though Eicca sang the background vocals a little bit lazy on the chorus. Cello rock continued then with the newest music video song Cold Blood and obviously after that song Franky fell down from the stage. I didn’t see that situation, but after that one Perttu made a little speech and said, that Franky fell down, but is ok and able to continue. I also saw a few pictures on the internet, where Franky showed his bruises, which came from that situation.

The main setlist  ended with Seek & Destroy and Hall Of The Mountain King cover songs. But before that, Apocalyptica played also a cover song from the Angry Birds game. Story behind that was, that Rovio (founder of Angry Birds) asked Apocalyptica to make a cover song from that game theme with Apocalyptica style with cellos. For me it was a little unnecessary and a useless part of the setlist, but the background was shown with nice Angry Birds videos and there were band members faces instead of birds. Then Franky was again needed and they played I Don’t Care and the last one was Dead Man’s Eyes from the new album. Dead Man’s Eyes left a very nice feeling and I would go back to see Apocalyptica again very soon. I recommend that  for you do too.