Interview with Alessio Bruni, the frontman of the Italian deathcore/djent metal band, Bleed Someone Dry. The band have released this year a new album under the name of “PostMortem |Veritas’’.

Greetings Alessio, how are you?
Hello Carla, very well, thank you! We are super excited for the release of the new album and the upcoming dates! 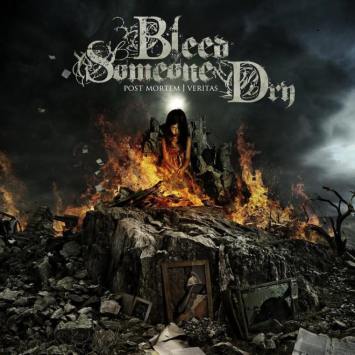 When did Bleed Someone Dry was founded?
The present formation of BSD is the same that created ”PostMortem |Veritas”, plays together since three years ago but the band has been active for much longer than that!

This year you have released the third album entitled ”Post Mortem/Veritas”. Tell me about it.
‘Postmortem | Veritas’ is a modern tale, based on a negatively pessimistic reality related to the current social context, analyzed through careful and meticulous observation, that only children are able to do. We tried to immerse ourselves in our daily reality but from the point of view of Aelia, a little girl of any given age of childhood, who asks questions related to adults common behavior , behavior which drives events and their on consequences. Through twelve points we imagined having to provide answers and explaining the ‘small’ issues that decide the unfolding of the regular things and society. At the same time we are honored to have been able to confront and work with great artists like Chris Donaldson, a very special person who provided a huge help in addition to his monstrous professionalism, Luca T. Mai of Zu and Mombu who honored us with his partnership and CJ of Thy Art Is Murder, a really helpful and nice guy who made a dream we had come true.

What can you tell me about the two other albums, ”The World Is Falling In Tradegy” and ”Subjects”?
As for the previous work “Subjects” and “The World is Falling in Tragedy” I can tell you briefly that they are two projects on which the current band worked only in part, 2/4 of us weren’t part of the band then and when they were composed. While twifit presents songs with strong trash influences, ”Subjects” had a crazy and distorted extreme sound. On the contrary in “PostMortem |Veritas” the sound features new musical styles and ideas. We tried not to lose our matrix “math” and incorporate it into a Modern Death, trying to create a dark and violent music scene . Personally, I am very satisfied!

What are the lyrical themes and who mainly writes the lyrics?
As for the songwriting, the instrumental part is composed by Jonny (guitarist) who brings each project in the studio where it is submitted to the band and discussed and changed at times, team work basically. As for the lyrics, I take care of them. Usually I let myself being inspired by my thoughts and what I want to talk about, then I create a theme and try to create a concept upon it in the more original way as possible.

What are the band’s influences?
Honestly we are a four-piece band and we listen to different stuff and each has his influences. Sure we have some points of contact and the bands that we like in common. But generally we listen to stuff that goes from extreme math (ex. The Dillinger Escape Plane) to Modern Death (the Black Dahlia Murder, Whitechapel), but also the current latest djent. A bit of everything. We try moreover to withold our originality without being influenced too much by other bands.

Are there any shows confirmed for this year?
We have some confirmed shows and others that we are settling at present. We are also considering the idea to program a tour in the coming months.

Do you have a message for Bleed Someone Dry fans?
To all those who have long supported us and appreciated our music, we say thank you and give our most sincere respect, when your work finds consensus and complacency it is always a great pleasure, we hope that the new postmortem veritas continues to be a good prospect as it has been up to now!

Thank you Alessio, all the best!
Thanks for finding time and effort to dedicate to us! It has been a great pleasure!