I had no idea that in 1992 there was some serious shit going down in the universe.  I was only sixteen at the time and thought the Iraqi War was a ‘thing’.  Little did I know that Chaos Wizards were threatening the galaxy, the 13th decedent of Undead Unicorn Slayer Angus McFife would rise up to once again battle the evil wizard Zargo…something-or-another and there is a Goblin Lord riding wings of doom.

GloryHammer return with their second album ‘Space 1992: Rise of the Chaos Wizards’ that shoots forward the ongoing tale of Angus McFife and his ongoing struggles with the evil wizard Zargowkfcb(sp?) into the far future(past) of 1992 where an intergalactic battle between good, evil and unicorn rages forever on.

So how are these songs?  Well if you are familiar with power metal in general you know the basics of what you are going to get here…catchy choruses, clean production and a clean vocal singer who can hit high notes.  What sets GloryHammer apart though is that they have songs that, while they are centered heavily with power metal themes, are extremely well written and catchy in all the right ways.  GloryHammer knows the clichés of power metal but knows how to use those clichés just right to make one of the best power metal albums I have heard in a very long time.  Are they over the top? Sure.  Do they know how to use that to their advantage?  Yes they do.  Are the songs typical subject matter for power metal?  Yes they are.  Do they know how to write the songs in a way that make for stronger material?  Again, yes they do and they know how to sell that shit.  This material in any other band’s hands other than GloryHammer, or Christopher Bowes who knows how to craft an idea into a sellable product, would instantly collapse in on itself from the absurdity that can come from ‘Space 1992: Rise of the Chaos Wizards’.  But due to the maturity of the band members as a whole they put out a fantastic product.

Also, the final key to this puzzle that brings it all together and completely sells it is the fantastic vocal ability of singer Thomas Winkler.  The man can sing, and not only can he sing he has a distinct voice for power metal especially in how he accents certain words in songs that gives them a little extra magic touch.  Especially how he sings ‘foes’ and ‘fire’ in a couple songs…I think he has picked up some of Bowes’ Scottish accent or something.

Thomas was great on the previous GloryHammer album but here he is fantastic and it is great to hear a voice in power metal that isn’t an emotionless sounding clone.  Big props to you Tom and big props to GloryHammer on this release.

‘Space 1992: Rise of the Chaos Wizards’ is such a fun album to listen to both because, yeah it is little over the top but also because the album is just so damn catchy and well done you can’t help but like it.  A definite must buy. 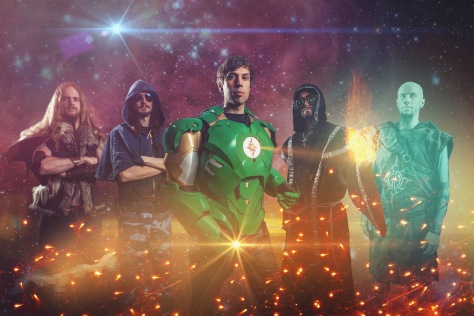