Stamina is a Melodic/Progressive metal band from Italy, which have released the third album last year entitled ‘’Perseverance’’. Luca Sellitto, the guitar player of the band had time to answer me some questions. 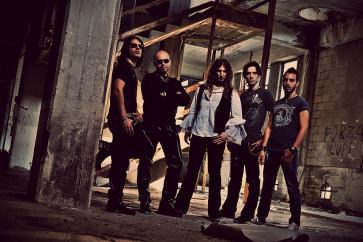 Tell me when did Stamina was formed?
I formed the band back in 2001 and never stopped it since then. The first to join was
the keyboardist, Andrea Barone. After almost 15 years of activity, Andrea and I are the
only original members left. We had a lot of ups and downs along the way, a lot of
line-up changes, label’s changes and so on…but we’re still here, stronger than ever!

Last year you have released the third album ”Perseverance”. Tell me about it.
I think that “Perseverance” is the most mature and solid album we’ve released
up until now. My songwriting is more conscious and all the band delivers a top-notch
performance, including all the special guest singers we had the pleasure to work with.
In fact, the album features some of the best voices around in the “melodic rock/metal” realm: Göran Edman (ex Yngwie Malmsteen, John Norum band etc.) and Nils Molin (Dynazty),among others.For the fact that we didn’t have a single frontman on the album, some people have considered it some sort of a “project” album and not a real “band” album. I don’t see it that way, it’s a 100% “Stamina band” album. We just had the problem that we couldn’t find a permanent singer in that period, so I came up with the idea of having different voices on the album, chosing the “right voice”according to the mood and characteristics of each song. It was such a great experience for me, both as a songwriter and producer, to have all this great voices at my disposal to paint the whole picture. In particular, I’m very proud of our collaboration with Swedish singer Göran Edman, who’s my all time favourite!

What can you tell me about the other band’s releases?
Well, I don’t like much the first album “Permanent Damage” to be honest, but it got very good reviews, as far as I remember. We were very young and unexperienced, I was still struggling a lot to decide what kind of sound to create and I was still trying to combining some jazz and fusion stuff with melodic and progressive metal, which is not a bad idea at all in general, but you have to learn how to do it smoothly. The second album, “Two of a kind”, has its moments. I still like half of the stuff which is on that album, but I think that with a better engineer behind the mixing desk it would have been a much better release. Anyway, “Two of a kind” received some stunning reviews all around the world and opened some doors, giving us the chance to do our first European tour and play various Countries: Holland, Spain, Germany, Austria, Belgium and Italy. We also played some shows as opening act band for Danish band Royal Hunt and it was such a great experience, bacause Royal Hunt is one of my favourite bands.

Are you going to release a new album soon?
Yes, of course! I’ve almost finished the songwriting process for our forth album and we have a new great singer in our line-up. His name is Alessandro Granato and I can tell you that his voice fits my compositions perfectly! He’s got the range, the tone, the tecnique…everything! I hope we’ll start recording by the end of this year and release the album during the first half of 2016. There will be again Andrea Barone on keyboards and Lorenzo Zarone on bass. I’ve been working with this team for years and I’m very proud of it. We’ll announce the drummer very soon!

What are the band’s influences?
All the great rock and metal music I grow up with. The list is very long, but I’m gonna give you an idea: Yngwie Malmsteen, Royal Hunt, Europe, Symphony X, Dream Theater, Stratovarius, Elegy, Kansas, Black Sabbath, Genesis, Yes and so on.

Any lyrical themes?
I deal with a lot of different themes in my lyrics. It might be anything: an event from my past, something someone told me, a personal point of view on a situation, a thought about life, God, love, a beautiful girl…whatever!

Are there any shows confirmed for this year?
Yes, we’re playing a Festival here in our zone as headliners on september 19th. We were also booked for an international festival in Belgium on september 26th, but unfortunately it’s been cancelled.

A message for Stamina fans?
Thanks for years of support, we are working on the next album for you! Hope to see you all on the road next year!

Thank you Luca, cheers!
Thanks to you, Carla!  Ciao!