Interview with Andrei Radulescu, the vocalist of the Romanian Death/Thrash metal band. 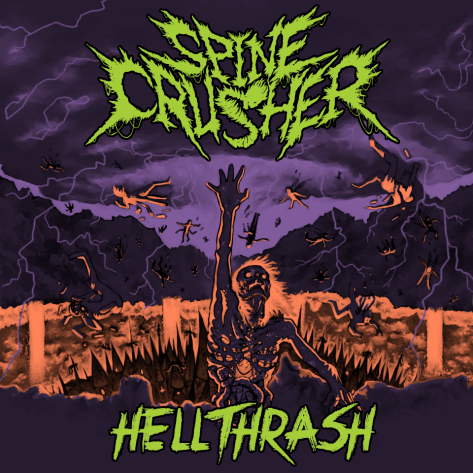 Hello Andrei, how have you been?

Hi! Thank you for this interview and for your time according to our band.

Tell me when the band Spinecrusher was formed.

The band was born at the end of 2008, thanks to Daniel Gheorghiu (lead guitarist) and Matei Gheorghe (drums), both been ex members of the band Desolation Decay. Later on Radu Nastase (bass) and Stefan Pascu (guitar) were contacted to join the band. The guys needed a vocalist who could handle with Death metal, so Daniel contacted me because we also know each other from the highschool and we are also good friends, he knew that I’m passioned with this music genre and I wanted to create a band like this.

In 2013 you relased the first demo ‘’Hellthrash’’ .What can you tell me about it?

It’s a demo composed with 3 old Spinecrusher songs from the beginning, 3 Thrash/Death metal songs which fans always seemed to be glad during concerts so that’s why these 3 songs were chosen to be on the band’s first material. I did not recorded these songs because that time I did not join the band yet but I can say about it that was recorded by the all members, you know a DIY, which almost all underground bands do this and I’m sure this is a demo who can be listened and liked by all old school metal people.

Are you preparing for a new album?

Yes. The debut album is ready and this year will be released. The album will contain 9 songs and with the release of this LP we want to close an important step so we can go further with new materials in the future.

Did you have some shows or tours local or abroad?

Are there any shows confirmed for this year?

The only show confirmed for this year will be later thi autumn (in September if I’m not wrong) in Bucharest. Other shows confirmed not yet.

Which are the band’s influences?

For sure our influences are the bands such as At The Gates, Bolt Thrower, Benediction, Cannibal Corpse but we don’t try to be like these bands. We are open persons and we listen to a lot of music, from the ‘60’s till music nowadays.

What are the fans saying about Spinecrusher?

I think fans are glad about this band and we can see this when they come to our shows. For us means a lot when we see a nice public, when they feel good and they appreciate our music, even after our shows some of them come to us to congratulate us. This makes us go further, and anyway, talking about people, they are different. People who likes you and people who don’t.

A message for the fans?

The only message I have for them if to be honest with themselves and doing what they feel to and not depends on others opinions.

Thank you Andrei, all the best!

Thank you too and hope to see you at one of out shows. Keep it true!