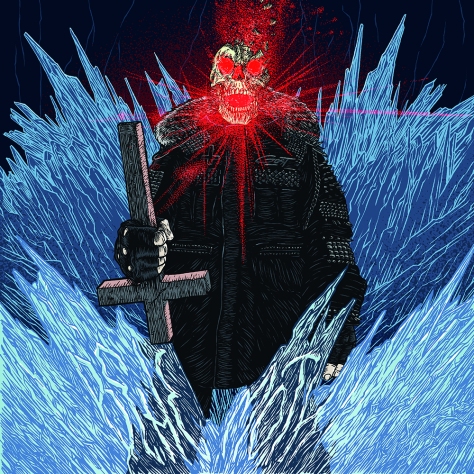 Running a heavy metal website I have to be selective in what music I review on the site as obviously I can’t start reviewing Katy Perry albums…or want to.  However on rare occasions I will make an exception if I think the music in some way can fit into a metal/horror them.  The previous such occasions has been the Slovenian Folk/Punk/Rock band Happy Ol’ McWeasel’s ‘No Offense’ and the Horror/Synth band Perterbator’s ‘Dangerous Days’.  On these rare occasions I have been extremely pleased with what those acts had to offer and this will be my third foray reviewing an artist that a metal website might normally avoid.  The artist is GosT with their debut album ‘Behemoth’.

GosT is a one man electro/synth/horror themed outfit that produces what I would describe a dystopian soundscape that if you hear it in a horror movie it would highlight the scenes where the subjects of the film are in their most desperate hour or when the evil of the movie first rises to show the viewer its full power.  If you are familiar with the VHS movie stores of the 80’s and the horror/sci-fi films of that era then GosT will remind you of the music you could have heard in those films.  You could easily take some of ‘Beheoth’s’ music and drop them into some of John Carpenter’s films or into the Terminator movie or any other number of the B-movie’s of the time.  Near Dark, Return of the Living Dead, Escape From New York and The Lost Boys are all movies that GosT’s music could easily fall into without missing a beat.

The opening few tracks, ‘Genesse Avenue’ and ‘Nightcrawler’ I think summarize best what GosT does best.  And that is, make a tune of electronic, sonic horror that makes the listener truly feel they are walking in a dangerous, dystopic world and that something from a lost technological, apocalyptic past has risen to come and destroy them.

I found the best listening experience I had while listening to ‘Behemoth’ was when I plugged in some earphones and went out for a walk.  It truly felt that I was walking in a movie soundtrack and that something from a forgotten age could really be lurking around a corner or within a dark shadow waiting to stalk me.  The music is really good at evoking that kind of imagery.

GosT is for the fan of 80’s horror films, that bygone decade where man and technology were just beginning to merge and new wonders and horrors were being discovered from such experiments.  Where as a kid you would sneak and watch the late night movies on TV your parents didn’t want you to see.  And for those of you who miss the days of being able to peruse an old mom and pop video store’s horror section looking at all the interesting art of the VHS boxes.

GosT’s ‘Behemoth’ is the soundtrack for those mentioned above who are looking for a soundtrack to their memories of the late night dangers of the 80’s films…and the fun of eating popcorn and laughing with your buds while secretly watching those films.