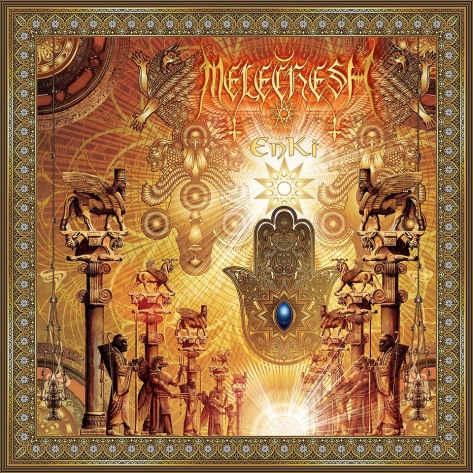 Do you long to experience the howling terror of a sandstorm bearing down on you, but lack the resources to mount a trek into the Sahara’s desert vastness? Or maybe you harbor irrational fantasies in which you invoke the names of Babylonian gods in a mad bid for the power to smite your more annoying coworkers with plague, pestilence, and poor credit? It’s possible that all you need is a change—a change from the lo fi, raw-grim-frost-tinged black metal clogging your Media Player library. What you need are the apocalyptic Mesopotamian stylings of Melechesh.

If you’re already a fan, you know what to expect. And Melechesh delivers. Enki is bottled fury, a whirlwind bound up in razor wire, raw and unforgiving yet focused and almost incantatory, as is the Melechesh style. See the track “Enki Divine Nature Awoken.” The sound absolutely shreds one moment, settles into an atmospheric breakdown the next, and all the while gives voice to something ancient and restless. Opening track “Tempest Temper Enlil Enraged” sounds exactly like what the title describes: a desert whirlwind suddenly arising, invoked by the fury of the enraged god of air and storms—for what reason is irrelevant. For those caught in his wrath, it’s life or death in a sandblaster.

But despite all its wrath, Enki has a gentler, more reflective side. “Doorways to Irkala” plays with traditional instruments—drums, oud, Arabian flutes. Eight minutes of rest and relaxation, almost necessary before the final song, “Outsiders,” a thirteen minute opus and a shattering way to bring the album to a close.

In many ways Enki recalls the Melechesh’s previous album, 2010’s Epigenesis, being similar in style and no less ferocious . . . no, similar is not the word I’m looking for. Consistent would better describe the band’s evolution, culminating with Enki. Few other bands can replicate the style over which Melechesh command mastery: oriental blackened thrash, folk-tinged black arabesque, Middle Eastern blackened folk—no two metalheads would classify it quite the same way, I’m sure. But you get the point. You know Melechesh when you hear them.