Once again I arrive way too early. Like two hours early. So I sit in the car reading Louder Than Hell: The Definitive Oral History of Heavy Metal, a book which in approximately 600 pages makes no reference to the folk metal movement—to say nothing of pirate metal—whatsoever. But who needs all these sub-genre classifications and debauchery anecdotes, anyway? I’m here to see Piratefest.

After I interview Alestorm (listen to the ridiculousness here), the show begins with The Dread Crew of Oddwood, an all-acoustic band of troubadors not out of place performing at a Renaissance festival. But nor are they out of place on a bill like Piratefest. In fact they fit right in, resplendent in beards and costumes and crab-walking merriment. I doubt a better opening act could have been found, judging from the crowd’s roaring approval.

This show is the first where I’m shooting as if a professional photographer. I find that the experience detracts somewhat from enjoying the concert. Jockeying for position with three other photographers between the stage and the crowd, and having only two songs in which to take as many photos as possible, means that the first few songs of every set are just a blur. (The photos came out pretty good though, considering I didn’t know what I was doing.)

Next up is Swashbuckle, of “Cruise Ship Terror” fame. The band has some sound

check troubles at first, so they regale the crowd with a bit of Dr. Dre karaoke—I’m impressed by their rap abilities. Admiral Nobeard (who has a generous beard) continually hits on the ladies. “You! You have huge boobs! You’re not 18,” he says, pointing at a busty lass in the front row during a silence in the music. The end of their set is marked with the Jurassic Park theme song, for some reason I still don’t understand, but don’t question. Swashbuckle are great fun. I’d invite them to play at a bachelor party. Or to entertain nerds at a Magic card game convention.

Headlining this absurd festival is Alestorm, the most famous of all pirate metal acts. 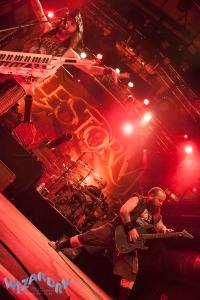 They perform the classics of their discography: “Nancy the Tavern Wench,” “Wolves of the Sea,” “Wenches and Mead,” “Keelhauled.” During “Midget Saw” they call out the shortest members of the crowd, one fellow who measures 5’1” and another fellow who is actually a little person. The two proceed to duke it out onstage in one of the most un-PC moments I’ve ever witnessed. Both take a stage dive at the end of the song—only the little guy makes it back into the crowd. The taller fellow hesitates and appears to land on the barricade. During “Hangover” the guitarist from Dread Crew of Oddwood comes onstage in the tightest pair of skivvies imaginable. Christopher Bowes makes reference to his dingle-dangle.

Piratefest is over all too quickly, but it’s clear that the pirate movement has a dedicated fan base. Where else are you going to see a girl wearing a full-body shark suit? Or find autographed copies of Jurassic Park at the merch table?

Piratefest North America isn’t over yet. If you’re on the west coast, check it out before it’s too late.