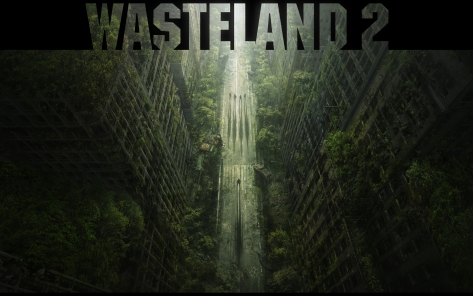 Well I was going to do a video review of Wasteland 2 but unfortunately I had all kinds of technical issues with trying to record and then edit…so fuck it.  So hopefully the written review will be a nice informative overview of the game.  Also, I am still playing the game and have not yet completed it so keep in mind I have not been to all parts of the game or the end game.

So, the first thing I want to cover here about Wasteland 2 is bit of the history of this game.  The game is a sequel to the PC game Wasteland from 1988.  That is right 1988…back when you could still buy vinyl records, the Oakland Raiders were the Los Angeles Raiders (but still sucked) and Iron Maiden were touring in support of their Seventh Son of a Seventh Son Album.  Also, Graphics looked like this…

So why did it take five presidential administrations, the grunge music invasion and the invention of the internet by Al Gore to make Wasteland

2 happen?  Well, I can’t really answer why for the first two things but I can say the invention of the internet was the one key to making Wasteland 2 happen.  I say this because Wasteland 2 is one of the most successful crowd funded games of all time that used Kickstarter as a means to reach out to fans of the original Wasteland to raise funds for the game.

Brian Fargo, the original creator of Wasteland tried for years to get a sequel made but due to various factors it never happened until as a

last resort he took to the online world and Kickstarter. And like an internet hobo asked us for change for his coffee.  But instead of coffee he got to make Wasteland 2 and as a donor we get the game.  So it is kind of like the internet hobo got his coffee…and…ummm…spit it back in our face as a token of gratitude?  GOOD ANALOGY!

So now let’s talk about Wasteland 2 shall we?

VISUALS: I guess the first thing to note is the visual aspect of the game.  Now I run the

game on my clunker of an i3 dual core processor with an Intel HD graphics card and it’s a laptop.  After some initial setup quirks, such as forcing the game to run in Direct X 9, I got the game up and running.  Now the game visually is ok.  I have heard some people complain about the graphics but I feel the graphics even on my limited hardware looks passable except on foliage…that does look pretty bland.  Otherwise the character animations I feel look cool, you can see the little details of your outfits and weapon modifications which I think is a nice touch.  Also, the artwork you encounter, like character portraits, in the game I think is really well done and fit the mood for the setting of a post apocalyptic world.  So overall I think the graphics of Wasteland 2 are passable or appropriate for the type of game we have here.  They aren’t going to be AAA level graphics but the game wasn’t funded to be one either. GRADE: B-

TECHNICAL/CONTROLS: This will be a boring section but an important one.  It will also be brief.  I am happy to report I can run the game even on a non-gaming machine like mine.  That makes me happy.  The game however does sometimes seem a bit sluggish, though many times it seems to run pretty well overall and it still looks ok.  I have played it on my girlfriend’s laptop and it does run a bit faster and smoother, so I won’t be giving a bad score just because it runs a bit slower on my laptop.  The one thing that does happen though is that when I run Wasteland 2 my laptop begins to heat up like a meltdown at Chernobyl.  I have read other people with better setups have also encountered this.  One time my laptop even shut down due to overheating.  So I’m not sure as to WHY it heats up other than maybe my graphics card.  I just get some ice packs and put under my laptop and I don’t worry about it.

Also, I want to commend iNxile for being on top of their game in getting this game to run and posting tips in forums for people who encountered issues such as myself.   Very helpful company and they released a patch about 1 week after release which actually seemed to make the game run better on my machine which was great as well.

If I had to offer any negative comments on the technical stuff would be in the control/camera department of the game itself.  When I first started playing the game I found moving my party and camera a bit odd and kind of hard to move around.  I had a friend of mine also complain about it being clunky.  The moving part I kind of got figured out pretty well with moving the camera around with the keyboard and finally settled in on getting around.  The big problem I found though was how the camera at times would rotate around behind the environment or just turn at odd angles making it hard for me to navigate.  I feel this could have been mitigated just a bit if some of the things they tried to add in the environment just wasn’t there…like things really high up in the air, i.e. cars hanging from cranes, pipes in the ceiling or just anything hanging in midair over places where you can walk.  I get they are trying to create atmosphere but sometimes that shit got in my way of seeing things and got on my nerves.

The other controls in the game such as selecting individual party members, inventory selection

and clicking things on the map all work well overall and is functional and intuitive.

In Combat the game switches to a turn based mode, and based on certain stats of the enemies and your squad members, each combatant takes a turn in trying to wipe out one side or the other.  I found combat fun and interesting as I try to position my group in the best tactical spots possible and try to stay alive.  Which I was doing pretty well at until I ran into a group of Honey Badgers that ate my ass for breakfast.  This also is good time to point out that combat in Wasteland 2 requires you to be a bit more tactical than just going in and blasting a creature as different enemies have different strengths and weaknesses.  While your weapons might be doing well against one group of foes they will be as effective as spit wads against another.

Overall the game runs fine and the camera annoyance aside you can navigate the game pretty effectively and combat is fun…until Honey Boo Boo Badger comes to play.

GAME/STORY: This is the area where I feel Wasteland 2 shines above whatever other flaws it has.  The story of Wasteland 2 takes place fifteen years after the events of Wasteland and you are attending the ‘retirement’ party for a Desert Ranger named Ace, who is a character you encounter in the first game.  As the ‘retirement’ is complete General Vargas gives you a speech and mission to hunt down the killer of Ace before you can become a member of the Rangers themselves.

As you travel across the Wastes you will encounter various locations and encounters and will be left with choices to make and people to talk to.  Some of these choices also will have dire consequences in the overall game world and affect your overall game.

The Desert Rangers have their own problems needing dealt with along with problems you have to deal with as you wander the wastes.  When you converse with people you are given a conversation box and words are highlighted for you to select however you are also given the option to type in keywords that can offer up new conversation possibilities, which is a throwback to the CRPG’s of the 80’s.

Also the voice acting in the game is fantastic and really adds to the genuineness of the game.  I am not sure where they found the voice actors but they are top notch and do an excellent job.

Also that character creation is always fun in RPG’s and Wasteland 2 is no different.  You have only so many points to add into various traits and skills of each character you make.  This also leads you do making some tough choices on just what to place skill points into, always leaving thinking maybe you should have put a point into something else.  You are also free to write in your character’s own biography which is a nice touch and I of course made my guy from Oak Ridge who survived a battle at the nuclear power plant there.  Though how he got into Arizona provides a bit of a plot hole in terms of story for game I guess.

Anyway, you’ll run into all kinds of things in the Wastes and the map is full of hidden places for you to explore and makes it fun to find new places.  The story seems fun so far though I am beginning to find my enemies getting a little tough for me to overcome in some areas…maybe I leveled my guys to fast?

Either way the game has been fun and enjoyable so far.

CONCLUSION: Wasteland 2 offers a fantastic, fun and great story filled RPG for fans of old school PC gaming but also for those who are of newer gaming generations.  The game can seem slow paced to newer gamers as many gamers of today are used to RPG’s being watered down a lot in favor of making them feel streamlined and ‘fast’.  But I encourage you to give Wasteland 2 a try as the game is very deep and has a lot of content for those who really enjoy putting time into their games.