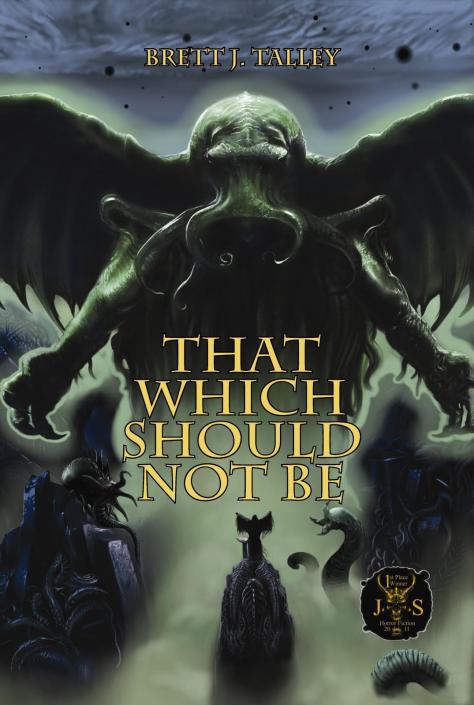 This is the first book review for Skullbanger Media but I am hoping it is a first of more to come.  Since I try to also cover horror on the site, mostly with movies, I am always on the look for other mediums as well.  Well what better way to cover horror than with a horror novel.   Not only a horror novel but one based on the Lovecraftian/Cthulhu mythos.  While Cthulhu is becoming a bit oversaturated in the geek/nerd culture I have always been a fan of H.P. Lovecraft and his stories.  I am also always curious how new generations of writers take on his material and convey a story as opposed to how Lovecraft wrote his work.

So this brings us to Brett Talley’s ‘That Which should Not Be’ which is kind of a anthology of tales that has one larger wrap around story which I thought was a pretty neat idea.  The basic premise of ‘That Which Should Not Be’ is a student at Miskatonic University is tasked by his professor to visit a nearby coastal town and track down a rare book and return it to him.  As the student arrives in the town he is soon met by four strangers who all relate a separate tale that took place in their lives and forever changed their outlook on life and reshaped their future.

Each of these tales makes up the bulk of the novel and of course revolves around various aspects and themes originally created by Lovecraft nearly a century ago.  I found these tales engaging as Talley’s writing style is very direct, imaginative and filled with imagery as to keep me, as a reader, engaged.  One tale revolves around a hunter/trapper who experiences a being beyond the normal wild animal one would find in nature.  Another tale looks into the darkness of Eastern Europe and the ancient evil that hides in the mountains of Romania while another gives a glimpse into the insanity you might find in a Lovecraftian mental asylum.

All of these stories are well woven tales of darkness as written by a contemporary writer of horror and all are fun to read.  Talley is a talented writer and I couldn’t help but feel as I was reading these stories how great it would be to see an anthology like this be put to film.  I really feel if right ‘That Which Should Not Be’ could make for a great horror anthology film.  The setup is perfect and each story unique enough from each other to hold a viewer for an entire movie while also tying into an overall wrap around story.

That being said I did find a few flaws with ‘That Which Should Not Be’.  A couple I consider to be minor flaws and one I would consider a moderate/major flaw not with Talley exclusively per se but with a lot of modern writers.  First I will address the minor issues.

So yes, this novel is inspired by H.P. Lovecraft.  There is no doubt about that in any way.  However, as I read some of the stories I felt Talley sometimes tried to either shoehorn in obvious links or quotes to Lovecraft that I think could just have been left out.  Most fans of Lovecraft know the quote, ‘That is not dead which can eternal lie Yet with strange aeons even death may die…’  We know it, we have seen it, and it is from one of his stories.  Iron Maiden has used it, Metallica has used it…the internet has used it to death…and yes Talley found a way to put it into a story that, to me just seemed like he was trying to find a way for a character to say it.  It just didn’t seem to make sense to me.

Also, there are a few cases of where Talley seems to, ‘Dime Store Novel’ his stories in how he name’s characters and such.  In one story, that takes our protagonists into Romania and allows them to cross paths with a few other people who are named…Batory and Vladimir.  Anyone familiar with history knows Dracula is from Romania/Transylvania and was named Vladimir and Batory seems like a slightly changed spelling of Countess Bathory who has been associated with Vampires in current times.  To me this just seemed like stereotypical naming of characters from a place or people ‘known’ for vampirism so let’s give them vampire names.

I point out these couple of issues not to dismiss Talley as a writer but to encourage him to break away from this because his writing is superior to this and I feel these little things help drag his writing down a bit.

Now on to the major issue I have.  In Lovecraft’s works, his stories always seemed to still have an element of the unknown left in them at the end and things weren’t truly resolved in terms of what the main character did at the end of them.  In Talley’s story and many others of today’s writers I find they try to reveal or do too much.  In my opinion I think Talley carried the ending too far and allowed the characters to be too much ‘In the know’ of everything.  I didn’t like it overall.  Not because it was poorly written but because I felt the characters accomplished a little too much and knew too much.  To me this didn’t leave me wondering as a reader what else is out there and what might be lurking just beyond my knowledge.

To me, I think this novel could have ended once the tome was retrieved by the student and given back to the professor.  Then it be revealed that the professor was truly the evil needing stopped but he had disappeared and it is now unknown what fate might befall the world.  Instead we get an extended sea voyage and a final showdown and a guy who knows all the right spells and so on.  I just didn’t like it that way.

Even so, ‘That Which Should Not Be’ is a great read for Lovecraftian fans and should be given a chance as Talley is a very skilled writer and makes the reading enjoyable.  Even if the book is a little bit TOO much of a love letter to Cthulhu and his Old Ones.

One thought on “Book Review: That Which Should Not Be”