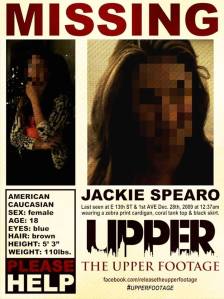 Starting with the Blair Witch Project, since the nineties the found footage genre has thrived, capitalizing on the idea of a true story told in real-time; unfolding before the audience through the eye of the camera like unbiased surveillance footage at the scene of an otherwise perfect crime. The concept was ingenious. After all, nothing gives more cred to our fears than hardcore evidence and irrefutable “proof” observed with our own senses. And at the juncture of past and present, we can certainly draw parallels between the widespread hysteria caused by the viral news reports spawned from the marketing campaign for the Blair Witch Project and everything from Paranormal Activity, Cloverfield, and even the Ghost Hunting tv genre phenomenon of today.

Taking cues from a different subgenre of found footage, in lieu of the supernatural twists which have brought most to fame, The Upper Footage (2013) uniquely draws inspiration from reality and documentary-style crime tv. Think of it as a special hidden camera edition of Dateline. On this episode, recovered footage from a certain night in question showcases the pad of a wealthy NY socialite (named Blake Pennington) and reveals the death of a young woman (Jackie) due to a cocaine overdose as well as attempts to discard the body.

The night starts off rather benignly with the promise of “Drink, smoke, and party”, as ushered by Pennington himself. Blake is introduced to us by friend Will who comes to his door armed with a camera in hand. Immediately the two bond in a fittingly mutual assholish bromance. The next segment shows the two friends plus three more (Chrissy, Taylor, and another guy) riding around the city in a limo, at first randomly and then on an epic quest to score blow.

It is at a stop in a nightclub in the Village where the gang of five encounter the gorgeous yet soft-spoken Jackie. The rest is history…

The first half of The Upper Footage is without a doubt flawless. Though our young adults are naught but inebriated, privileged and annoying twats, it is that obliviousness which makes the story believable. However, immediately after Blake and crew decide to leave the camera rolling in order to document the night and corroborate their stories, even after much heated debate, our suspended belief wanes. It just isn’t a legit enough reason to keep filming. You know, unless you plan to get caught. To be fair, establishing why the camera is still rolling at a certain point has always been one of the sketchier parts of maintaining credibility in the found footage genre.

Although the film has been touted as a statement on the power of the elite, The Upper Footage moreso shows how both news agencies and individuals continue to be blindsided by incredulous claims of Blair Witch Project-like proportions. There is a potent mix of tabloid culture and social media combined in equal ratios with the instant reputability of found footage. The result is a cleverly immersive experience that leaves audiences on a paper trail to discover the truth long after the end credits have rolled.

Probably the most amusing part of The Upper Footage is seeing how the lines between fact and fiction have blurred in the real world, inspiring events involving several well known celebrities as well as picketers both for and against the film’s release. But interpretation is key here. First and foremostly the question is where you the viewer draw the line.

For originality, The Upper Footage earns a perfect 5/5. Overall: