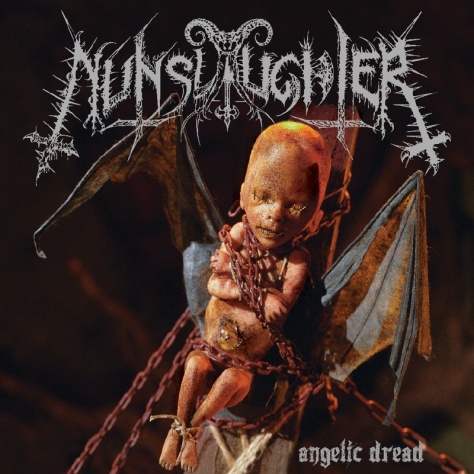 This will be a quick review. But first, let me get something straight: Nunslaughter has been around since 1987, and has not only produced four full-length albums but also appeared on something like 130 demos, splits, EPs, singles, live albums, box sets, and compilations? And I’m only now learning of this band’s existence? That’s the paradox (and definition) of Underground: so prolific that even seasoned metalheads can be unaware of a long-running band.

Angelic Dread is Nunslaughter’s first double LP, featuring a full hour of grindcore-infused death metal. Now, the grindcore subgenre does not often make itself easy to listen to. With few exceptions (Stuka Party, Extreme Noise Terror, Nails, Machetazo) I find most such bands derivative, uninteresting, and just downright repellant. The advantage Nunslaughter have is their ability to craft consistently extreme, aggressive songs without falling into the traps of redundancy and obnoxiousness. I don’t know exactly how Nunslaughter do it, but this pummeling 31-track double album manages to hold my attention.

Angelic Dread holds strongly to the band’s lyrical themes: Satan, how awful Christianity is, vomiting at the sight of Christ, holding Black Masses, etc. The death metal side of the music brutalizes, pummels, strips off outer layers of skin. The grindcore side keeps things short, aggressive, and in your face. The longest track, “Three Nails, One Liar,” clocks in at three-and-a-half minutes; the shortest, “God,” runs a whopping minute and nine seconds. The lyrics of “One Bad Bitch” describe succinctly what you’ll get listening to Angelic Dread: “One bad motherfucking bitch.”

What more do you want from a band like Nunslaughter?

Don of the Dead (vocals)