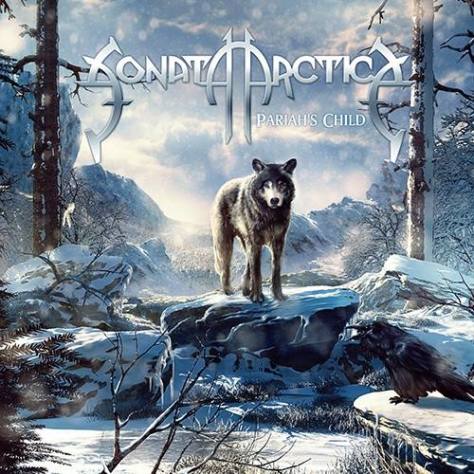 I want to like Sonata Artica.  I really do, but for the life of me I just have never been able to fully grasp their music I guess.  There have been some songs like ‘Full Moon’ that I really enjoyed and I feel is good catchy song but for the most part their music has always seemed to be attempting to be epic but always falling flat.  So, we have ‘Pariah’s Child’ upon us and it seems that the band has went back to a power power/symphonic style than on their previous album forsaking the prog rock style a bit.  On one hand I think it has helped, on the other…I still am not completely sold on the band.

‘Pariah’s Child’ is filled with everything that a power metal fan should enjoy.  It has the use of synths (heavily), catchy hooks and of course the over dramatic sense of sensitivity through Tony Kakko’s vocals.  I will admit,I am a power metal guy.  I like the genre and ‘Pariah’s Child’ surprised me in the sense that it turned out better than I had thought it would.  However, it still seems as if the band just does not have the force of being a more aggressive band beyond sounding like a pop metal band.

The songs on the album have catchy hooks and synths in parts but also the songs never seem to really just ‘take off’ for me.  For some reason the album just never tries to go to the next level.  I feel a little let down by this as I feel that when I hear the songs there is something more there just waiting to break through but the band holds back for some reason.  I’m not sure if this was on purpose as if they wanted to go for a more pop sound and fan base or if this is just who Sonata Artica is.  I know the band does have a lot of female fans and yes this album will make the girls wet.  No other song will do this more than the band’s big epic ballad titled ‘Love’.  I’m sure with this one the panties will drop.

For me, yes ‘Pariah’s Child’ was better than I expected but also it isn’t something I’m going pop a boner over either…unless I have a Sonata Artica fan girl alone and trying to get those panties to drop.  Que the ballad…