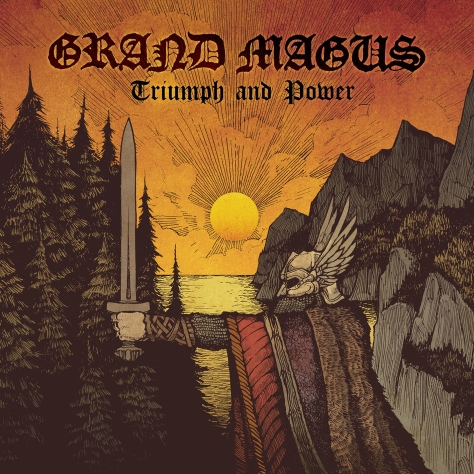 I’ll say it right now, ‘Triumph and Power’ offers a perfect blend of doom metal styled music mixed with what is traditionally power metal styled lyrics and subject matter.  I’ll also go on record and say this is going to be one of the best records of 2014.  The album truly is a strong entry into the metal genre.  With powerful songs such as ‘Steel Versus Steel’, ‘Fight’ and ‘Hooves of Gold’ the band is well on its way to cement its place in the hearts of a lot of metal heads out there.

Delving into ‘Triumph and Power’ you will find the music very doom oriented…in fact if it wasn’t for the subject matter the band sings about it would be a pure doom band.  The music is played at mid tempo pace, the singer is a mid ranged singer but with a very strong, baritone voice that really adds nice atmosphere to the songs.  Add in the Dark Ages/Viking themes and you have an album that strips away the over the top theatrics of what power metal would offer and add in the gloom and dread that a doom metal band has.  To give some context to what you can expect from Grand Magus, imagine a fantasy movie or game.  Most power metal bands would be something like World of Warcraft…cartoony and over the top.  Grand Magus would be more like the movie ‘Black Death’ or ‘Valhalla Rising’ bleak, brutal and hopeless.

‘Triumph and Power’ ushers in a golden age of a doom metal that all metal fans should raise their fist to.  Great material from a great band.  I look forward to seeing them at Metal Fest in Germany this year.