With all the talk going on about a remake of John Carpenter’s ‘Escape From New York’ in the works I thought I would go back an rewatch the 1981 original and see how it holds up, since I know most people have a disdain for remakes of movies they have a fondness for.  Regardless if the movie may not be that great to begin with.   So what are my thought of the old version and is a remake warranted or even needed?  Read on for my expert opinion that everyone should obviously listen to and obey.

I will first start off by saying I have never been on the hate train for remakes.  I feel sometimes they do a good job and John Carpenter’s ‘The Thing’ is one of the best remakes of all time.  So in my opinion I don’t think they are a bad thing in and of themselves.  I do however think it’s strange that Hollywood went from remake, to reboots of movies that are only 5 years old or so.  So I get the disdain for remakes or reboots but not because I’m always afraid some movie I saw on late night HBO when my parents were asleep is going to be ruined by people who “Don’t get it.”

So let’s take a look at the original ‘Escape From New York’ and see if the people in an outrage over a remake have merit and if the film could benefit from an update.

I guess the first thing to start off with here is how well the film holds up 30 years later.  Honestly, it still does pretty well but also it’s a bit shaky.  Kind of like that old athlete that is in the twilight years of his career.  He still has some moves and can be tricky but his knees are on their fourth surgery and he isn’t as fast as he used to be.  ‘Escape From New York’ has the signature Carpenter feel to it and it does well in creating a dystopic atmosphere.  The film is very dark…almost too dark to where I felt maybe they could have used a bit more lighting.  Also due to the time period, the technology in the film by today’s standards does look kind of dodgy and bulky.  I can’t really blame the movie on this though, it can’t help it was made in 1981 and the people then can only work with materials and tech they have of that period.

Touching on the acting and overall plot I feel ‘Escape From New York’ is a bit of a mixed bag.  Acting wise it’s ok.  Some of the dialog is dated and some of the acting is either a bit stilted or just kind of corny (Cabby).  Even Kurt Russell as Pliskken at first with his raspy voice sounds bit forced and a little silly.  Plot wise I would have liked to have seen some of the BIGGER picture of what has happened to the world extrapolated on at least a little more.   We know the world is shitty and America has sank down in the shitter but we really don’t get the FEEL or WHY of that as much as I would have wanted.  Also, it would have been cooler to see a little more about the various inhabitants/gangs of the city and who or what they are.

The really big question in all of this though is who will play Snake.  Kurt Russell is iconic with this character.  If you ask people what character do you know Kurt Russell for they will either tell you Snake Pliskken or Jack Burton from ‘Big Trouble in Little China’.  So replacing him as Snake could very well make or break any new Escape movies.  Honestly, after watching the movie it’s hard to envision another person portraying the role in a way that Kurt did.  Visually wise there are actors that can pull it off with people like say, Josh Brolin.  Again, I’m not sure if Brolin would be the man for the part in terms of getting the feel of the character right or really who it could be.

Looking at ‘Escape From New York’ through 21st century eyes I still enjoy the movie.  It’s a good flick and it’s a fun flick.  I also can obviously see how a remake could benefit it if handled correctly, which is a tricky business in Hollywood where they tend to see a movie like this and just make it all CGI sci-fi tech.

The obvious trick here, to get the remake right, is casting the right guy for Snake to get the people in the door.  On a deeper level though, to correct the flaws of the original, is writing a more immersive story to give the film more depth than the original had.  You do that right Hollywood and you’ll get yourself the blockbuster trilogy you want. 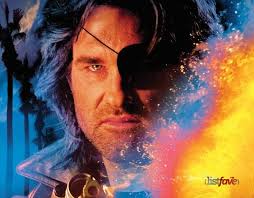