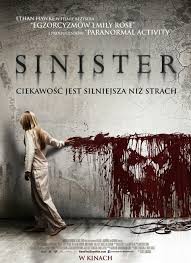 So when I saw the previews for Sinister it looked interesting even though Ethan Hawke was in it. So, I was willing to view this puppy even if The Hawke was going to Emo the shit out of some Horror.  So how did it fare?  Did it scare?  Did The Hawk wear some good ole Gen X clothes which is a horror in and of itself?  Yes and Yes.  Read on!

The movie starts out with the down and not quite out author Ellison Oswalt, played by Hawke, moving himself and his family into a new home so he can work on his new True Crime book looking into the unsolved murders of a family that was found hanged in their backyard.  During the moving in period Ellison discovers a box of Super 8 films in the attic and proceeds to view one of the film reels.  What he discovers is that the first film he views is actually a recording of the murdered family he is researching for his new book.  At this point in the movie is where Ellison is faced with a decision that ultimately plays out how the rest of the film unfolds and shows just what he is willing to do to try and recapture the fame he had from his first best seller.

As the movie goes on and Ellison begins to unravel the mystery of the murders, he also begins to experience more and more strange occurrences in the house to the point his sanity seems to be fraying until he finally reaches a point he has to decide what really is important to him. 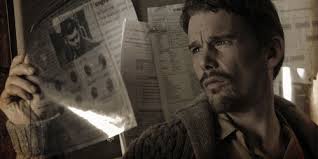 Sinister does a good job with its storytelling and building a nice little mythos of what really happened with the murders that Ellison is researching.  It builds up some nice scares and the atmosphere in the movie suits the tone of the film well.  Also, the movie introduces what I feel could be a interesting new “evil” to horror.

Do I have any qualms with the movie?  Yes a few.

The story as I mentioned earlier is an interesting one, however, there are parts of it that I found predictable and I kind of guessed what was going to happen.  Also, one of Ellison’s children seemed to have had a problem with night terrors which I felt the movie could have explored a little bit more.  However these aren’t deal breakers for the movie.  The acting is solid by all the cast, the story is good and interesting and the scares are there enough to give you some genuine jumps.

If you get the chance to view Sinister when it appears on DVD on the 19th give it a go.  You could do much worse.